Sometimes our eyes play tricks on us. Even when we know what is actually happening, our visual system won’t let us see the reality. Michael Bach has an extensive collection of 141 optical illusions, along with explanations of what’s tripping up:

Optical illusion sounds derogative, as if exposing a malfunction of the visual system. Rather, I view these phenomena as highlighting particular good adaptations of our visual system to experience with standard viewing situations. These experiences are based on normal visual conditions, and thus under unusual contexts can lead to inappropriate interpretations of a visual scene (=”Bayesian interpretation of perception”). 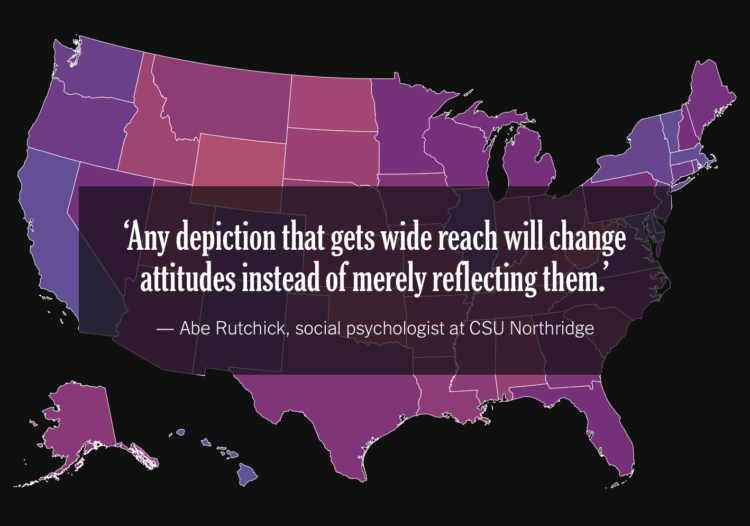 For NYT Opinion, Betsy Mason outlines the design challenges behind election maps. Do you show geography? Do you focus on scale? What colors should you use? For every choice, there’s always tradeoffs, which is why there are so many views.

Colour Controversy is a game of perception and labeling 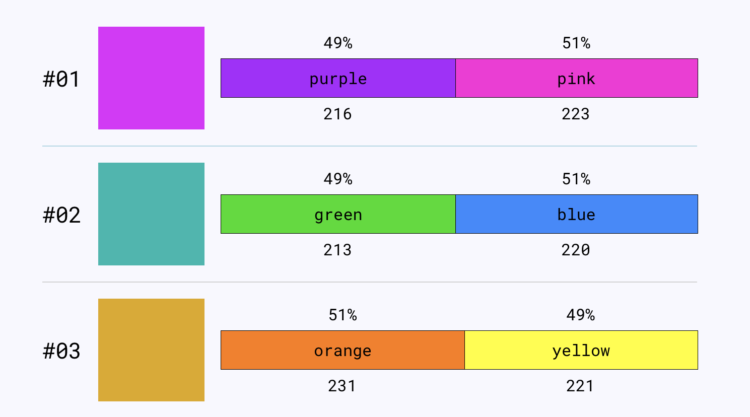 Colour Controversy is a simple game that shows you a shade and asks you what color it is. The fun part is that the shades are usually in between two colors, say blue and green, and you can only choose one. A running tally is kept so that you can see the “most controversial” colors.

What states are doing to make mail-in ballots clearer 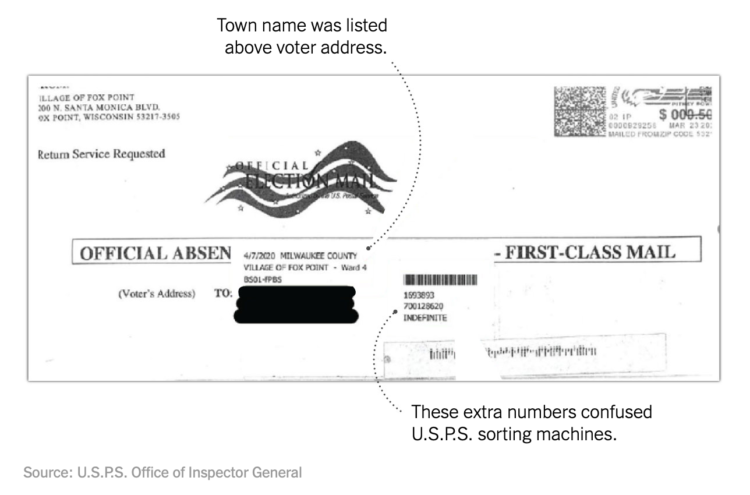 Mail-in ballots can be rejected if they’re not filled out or mailed correctly. A small percentage of them always are. This year, when we’re talking millions of mail-in ballots, even a small percentage means a lot of tossed ballots. For NYT’s The Upshot, Larry Buchanan and Alicia Parlapiano show how some states modified the design of their ballots to reduce the rejections.

For The Pudding, Ilia Blinderman rounds out his three-part series on creating visual, data-driven essays. This last part in on the fuzziest task of telling stories:

Storytelling, however, is much more abstract — it’s not merely a technical matter of creating an image of a map, or designing the right chart; rather, it refers to the broader universe of considerations that impact nearly every decision you make in the way you frame and present a project. The focus is much less on the technical “how,” like in the first two installments of these guides, but on the “why” of designing the narrative. It certainly doesn’t help that technical tools are inherently more concrete: they’re ways of solving specific problems (e.g., “how do I show the locations where people are concentrated on a map?” or “how do get this visual element to move through this specific path?”), while storytelling is much more of a nebulous concept. Thus, in this guide, I’ll be focusing on the relevant questions and considerations that we, at The Pudding, tend to consider when creating data-driven projects.

Picking the right colors for your charts 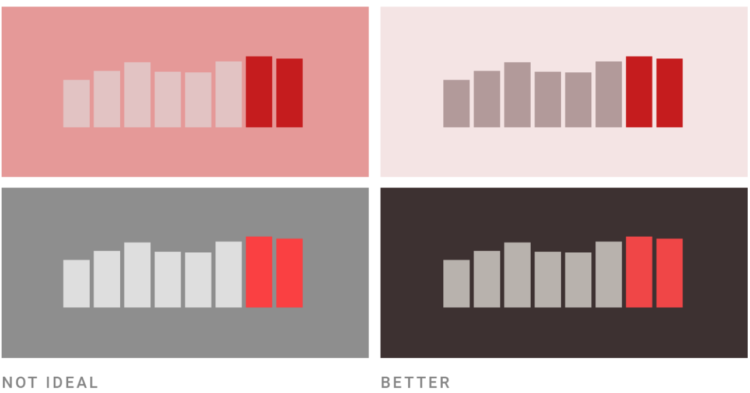 Picking colors for your charts can be tricky, especially when you’re starting a palette from scratch. For Datawrapper, Lisa Charlotte Rost has been writing guides on color as it pertains to political parties, gender, and more recently, colorblindness. Rost put the pieces together for a single, more comprehensive guide on the subject.

Be sure to check out Rost’s other guides on making better charts. She has a knack for explaining visualization methods in a practical and concrete way. 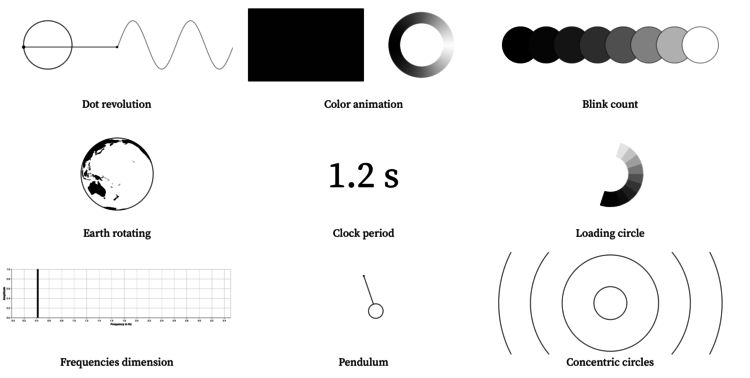 Pierre Ripoll provides several ways to visualize periodicity using animation. Moving dots, rotating spheres, concentric circles, oh my. He uses D3.js and it’s an Observable notebook, so you can see what’s going on under the hood.

Manuel Lima goes into the history of the pie chart, or rather, circle representations in general. Despite many people poo-pooing the chart type over the decades, it keeps hanging around:

We might think of the pie chart as a fairly recent invention, with arguably more flaws than benefits, in regards to the statistical portrayal of data. However, if we look deep into history we realize this popular chart is only a recent manifestation of an ancient visual motif that carried meaning to numerous civilizations over space and time. A graphical construct of radiating lines enclosed by a circle, this motif is also a powerful perceptual recipe. If we look deep into ourselves we uncover a strong proclivity for such a visual pattern, despite the final message it might carry. As one of the oldest archetypes of the circular diagram, the sectioned circle will certainly outlast all of us, and indifferent to criticism, I suspect, so will the pie chart.

Lima wrote a whole book on the use of circles in information design, in case you’re feeling yourself drawn to the shape for some unexplained reason.

Why the “flatten the curve” chart worked

I know it seems like ages ago when we were talking about flattening the curve, but it was a rallying cry at some point. The charts that started it all weren’t particularly fancy or something to admire. For Mother Jones, Abigail Weinberg wondered why it still worked:

There were axes and legends, and Drew Harris, a professor of population health, would later add a line representing the capacity of the health care system, but in truth there was nothing particularly rigorous about the chart. It was a work of the imagination, too artless to be art but lacking the hard empiricism we expect of science. That in-betweenness is what made it so effective.

At the time, there were so many unknowns that projections seemed hard to grasp onto. But the visual concreteness of a chart, even though it was abstract and not based on actual data, seemed to be just enough certainty.

We like to complain about how data is messy, not in the right format, and how parts don’t make sense. Reality is complicated though. Data comes from the realities. Here are several guides to help with visualizing these realities, which seem especially important these days.

Visualizing the Uncertainty in Data

For when you don’t know what is going to happen.

We love complete and nicely formatted data. That’s not what we get a lot of the time.

Step 1: Figure out why the outlier exists in the first place. Step 2: Choose from these visualization options to show the outlier.

Focus on finding or displaying contrasting points, and some visual methods are more helpful than others.

Things have a way of repeating themselves, and it can be useful to highlight these patterns in data.

A single dataset can tell you a lot of things. See also how questions can guide you.

How to Spot Visualization Lies