This is perhaps the single piece of advice we give most often at FiveThirtyEight, but it’s especially important in the final couple weeks of a campaign. After a lull this weekend, there are likely to be a lot of polls the rest of the way out. On any given day, it will be possible to take the two or three best polls for Biden and tell a story of his holding or expanding his lead, or the two or three best polls for Trump and make a claim that the race is tightening.

Resist buying too much into those narratives. 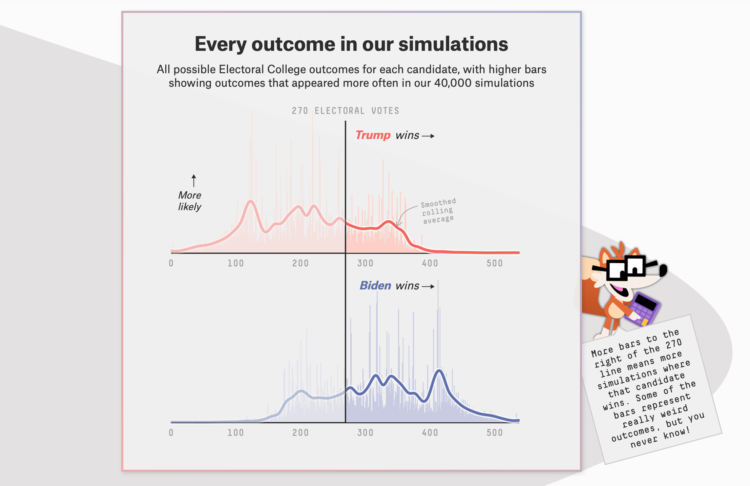 The election is coming. FiveThirtyEight just launched their forecast with a look at the numbers from several angles. Maps, histograms, beeswarms, and line charts, oh my. There is also a character named Fivey Fox, which is like Microsoft’s old Clippy providing hints and tips to interpret the results.

One thing you’ll notice, and I think newsrooms have been working towards this, there’s a lot of uncertainty built into the views. It’s clear there are multiple hypothetical outcomes and there’s minimal use of percentages, opting for fuzzier sounding odds.

Remember when election forecasting went the opposite direction? They tried to build more concrete conclusions than talking heads. Now pundits frequently talk about the numbers (maybe misinterpreted at times), and the forecasts focus on all possible outcomes instead of what’s most likely to happen. 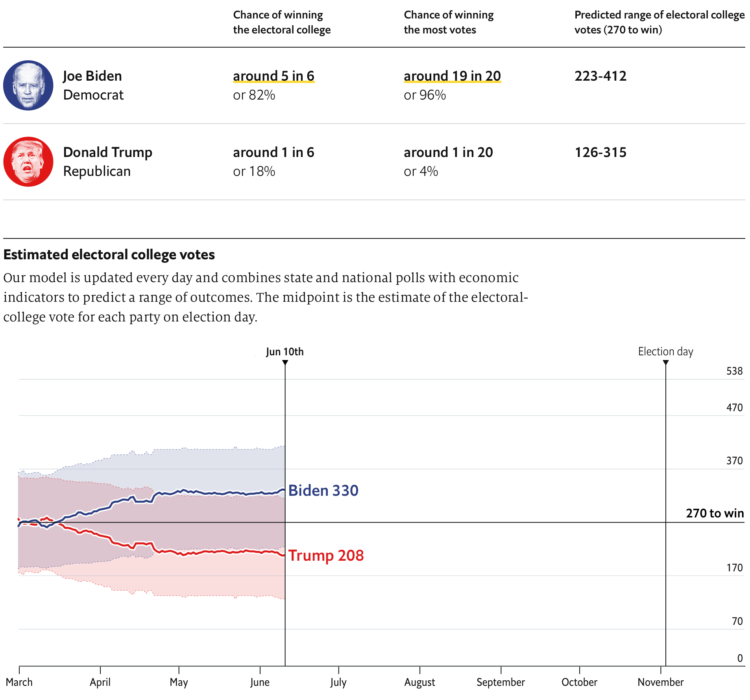 The Economist launched their 2020 elections forecast. Right now a part of my brain is telling me to avoid election forecasts this year, but the other part of me is like, don’t fight it, you know you’re going to look.

At least The Economist put their modeling code up on GitHub (implemented in R and Stan) and is publishing their polling data (linked at the bottom of the forecast page as a Google sheet).

Ever since the huge forecasting upset in 2016, I’ve tended to stay away from that stuff. I mean, it was painful to watch the Golden State Warriors, a huge favorite to win the championship basically the whole series, lose to the Cleveland Cavaliers. Yeah. The Warriors. What were you thinking of?

Alas, it is 2018, and FiveThirtyEight has their forecast for who will control the House. Mainly, I post for the burger menu to select the type of forecast you want. 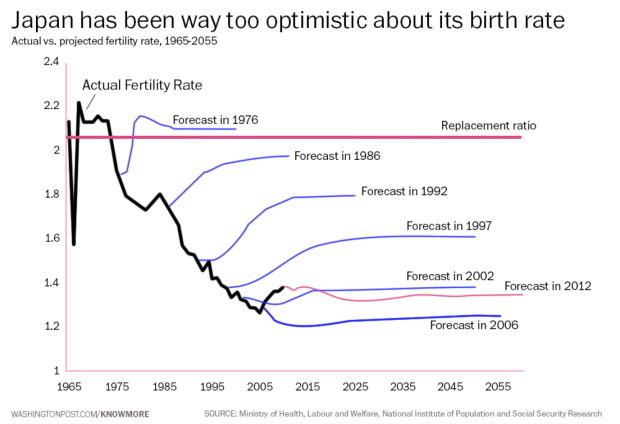 It's hard to predict the future, especially when humans are involved. Oftentimes, there are just too many variables to control for to estimate accurately. In the chart above from the Washington Post Wonkblog, Japan's fertility rate is plotted against various forecasts over the years, and you see forecasts headed upwards, but in reality it decreased consistently since the 1970s. This is based on work from Katagiri, et al (pdf).

See also a similar porcupine chart from Amanda Cox in 2010 that compared US deficit against forecasts.