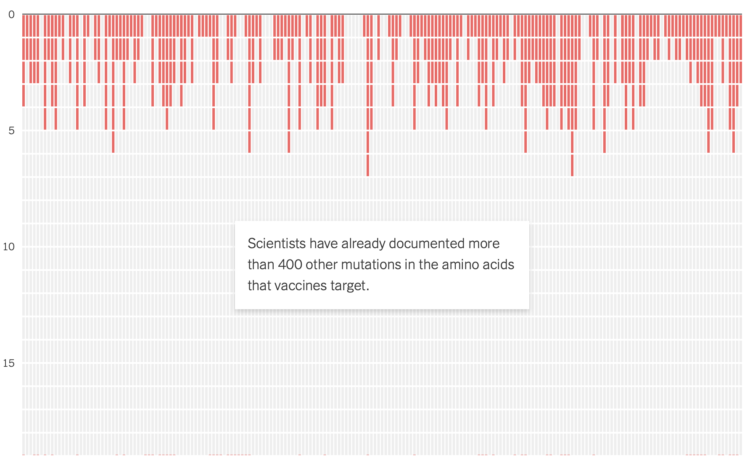 For NYT Opinion, researchers Sarah Cobey, Jesse Bloom, and Tyler Starr, along with NYT graphics editor Nathaniel Lash, discuss the potential mutations for the coronavirus. The accompanying graphic zooms in on the amino acids that allow the virus infect human cells. Scroll to see the mutations in the Delta variant and Omicron, and then keep going to see where else we might be headed.

Bacterial Doubling Times in the Wild

How fast do bacteria grow outside the laboratory? This simple question is very difficult to address directly, because it is near-impossible to track a lineage of bacterial cells, ancestor-to-decendant, inside an infected patient or through a river. Now in new work published in Proceedings B, Beth Gibson, Ed Feil, Adam Eyre-Walker and I exploit genome sequencing to try to get a handle on the problem indirectly.

We have done it by comparing two known quantities and taking the ratio: the rate at which DNA mutates in bacteria per year, and the rate it mutates per replication. This tells us in theory how many replications there are per year.

The mutation rate per replication has long been studied in the laboratory, and is around once per billion letters. Meanwhile, the recent avalanche of genomic data has allowed microbiologists to quantify the rate at which bacteria evolve over short time scales such as a year, including during outbreaks and even within individual infected patients. Most bugs mutate about once per million letters per year, with ten-fold variation above and below this not uncommon among different species.

For five species both these quantities exist. The fastest bug we looked at causes cholera and we estimate it doubles once every hour on average (give or take 30 minutes). The slowest was Salmonella, which we estimate doubles once a day on average (give or take 8 hours). In between were Staph. aureus and Pseudomonas at about two hours each, and E. coli at 15 hours. These are average over the very diverse and often hostile conditions that a bacterial cell may find itself in during the course of its natural lifecycle. To find out more about the work, please check out the paper.

Few papers have stimulated bloggery like the one on the randomness of cancer  by Bert Vogelstein and Cristian Tomasetti, which Science published January 2 (paywall). That doubtless has something to do with the fact of Vogelstein. It’s hard to … Continue reading »