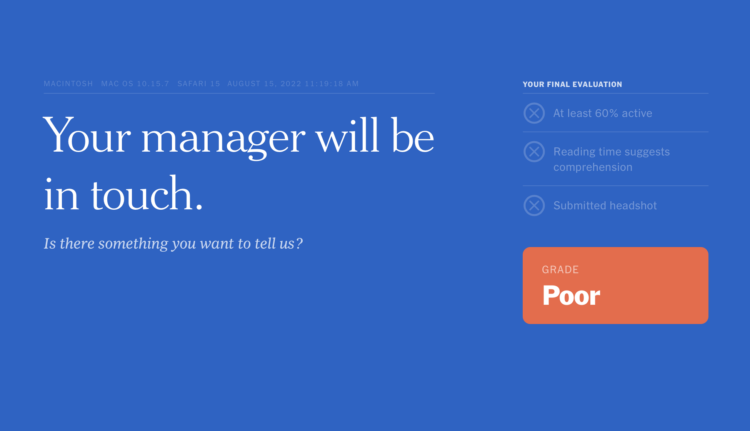 Time splits from a visualization freelancer

Eli Holder shows how he split his freelance time across various projects and categories. With visualization work, a lot of your time is spent doing non-visualization things:

As expected, at 16 percent, data wrangling and analysis takes a significant chunk of total time. This includes data prep, which I’ve categorized as fairly mindless data engineering or spreadsheet maneuvering (nine percent) or data pulls (three percent). More interesting data work was more fragmented: ~two percent of the time was exploratory analysis (e.g., for storytelling), ~one percent of the time was spent designing metrics (e.g., exploring different calculations that might best tell a given story) and another one percent was creating mock datasets (e.g., to compensate for data security constraints or clients who are slow to provide real data).

I don’t track my time with FlowingData, but if I were to guess, I spend at least half my time on analysis and wrangling. If you consider the many potential visualization projects that I scrapped because nothing panned out in analysis, that analysis/wrangling percentage goes up a lot more.

Sometimes you gotta dig a lot before you find anything worth showing. 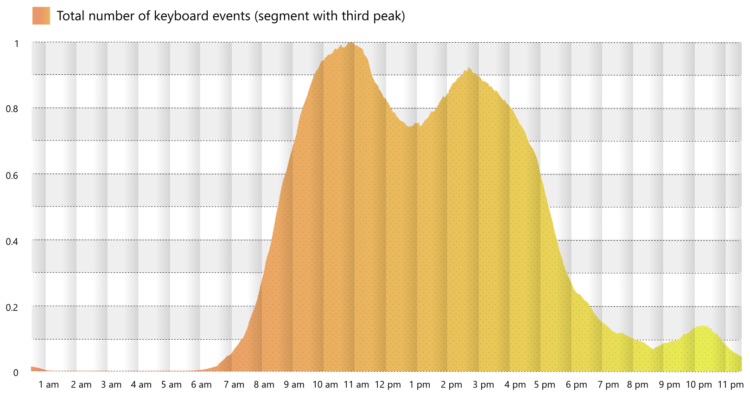 Microsoft researchers analyzed keystrokes by time of day, for a sample of Microsoft employees during this past summer. You can see the typical peaks during work hours with a dip for lunch. But among 30% of workers in the sample, there was a third peak starting around 9 o’clock in the evening.

That third peak felt too close to home for me. 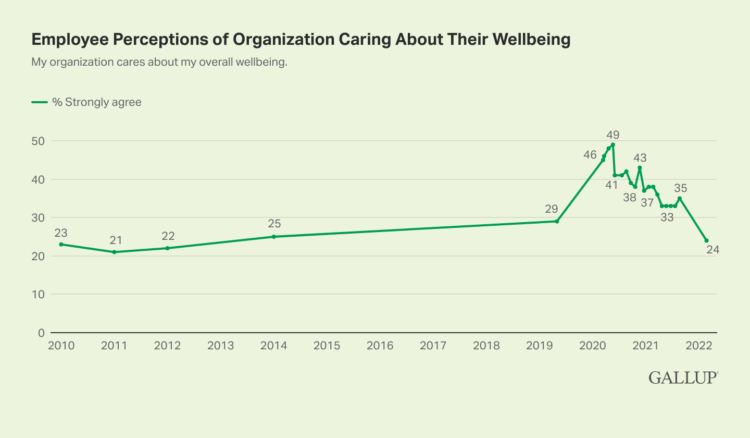 Based on polls by Gallup, almost half of U.S. employees thought their employers cared about their well-being early on in the pandemic. That sentiment did not last:

Fewer than one in four U.S. employees feel strongly that their organization cares about their wellbeing — the lowest percentage in nearly a decade.

This finding has significant implications, as work and life have never been more blended and employee wellbeing matters more than ever– to employees and the resiliency of organizations. The discovery is based on a random sample of 15,001 full and part-time U.S. employees who were surveyed in February 2022. 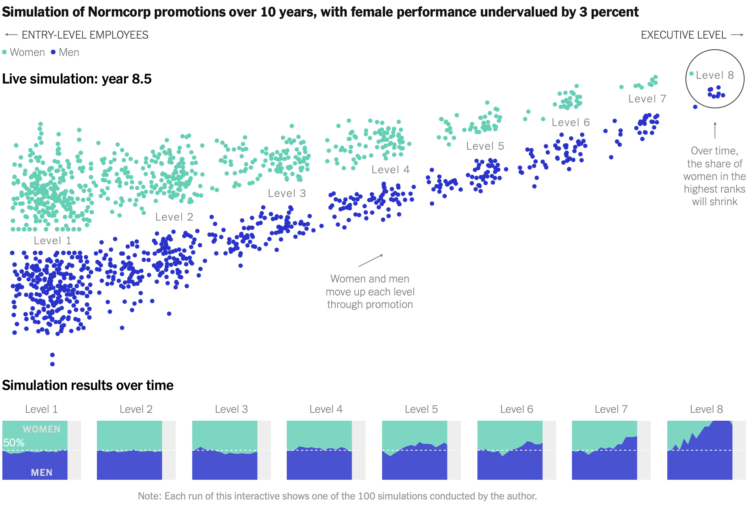 Yuhao Du, Jessica Nordell, and Kenneth Joseph used simulations to study the effects of small gender biases at entry level up to executive level. It doesn’t take much to skew the distribution. For NYT Opinion, Yaryna Serkez shows the simulation in action with moving bubbles and stacked area charts for each work level.

The simulation imagines a company where female performance is undervalued by 3 percent. Each dot represents an employee, and they either move up with promotions or stay still. The distribution of men and women start even but end very uneven.

Social distancing when we’re back in the office

For Reuters, Sarah Slobin and Feilding Cage imagine life back at the office with an interactive game. Navigate through different office scenarios while maintaining social distance:

To understand what that might feel like, we spoke to some experts on work and workspaces who predicted that social distancing measures and hybrid work models are here to stay. Walk through our simulations below to experience what going back to the old/new office might be like. Make sure to avoid contact with others along the way!

I haven’t worked in a proper office in many years, and it never appealed to me, but it sounds pretty nice these days.

Not so likely life of The Simpsons

For The Atlantic, Dani Alexis Ryskamp compares the financials of The Simpsons against present day medians, arguing that the fictional family’s lifestyle is no longer attainable:

The purchasing power of Homer’s paycheck, moreover, has shrunk dramatically. The median house costs 2.4 times what it did in the mid-’90s. Health-care expenses for one person are three times what they were 25 years ago. The median tuition for a four-year college is 1.8 times what it was then. In today’s world, Marge would have to get a job too. But even then, they would struggle. Inflation and stagnant wages have led to a rise in two-income households, but to an erosion of economic stability for the people who occupy them.

Someone should take this a step further and look at distributions and time series to show the shift, with The Simpsons as baseline.

These days, most of us don’t have to do much to turn on a light when it’s dark out. But what if I told you it used to take a lot more time and money to get that sweet artificial light? For The Pudding, Ilia Blinderman and Jan Diehm equate scrolling down one pixel to one second for an average waged worker. See how much you have to scroll/work to earn one hour of light. 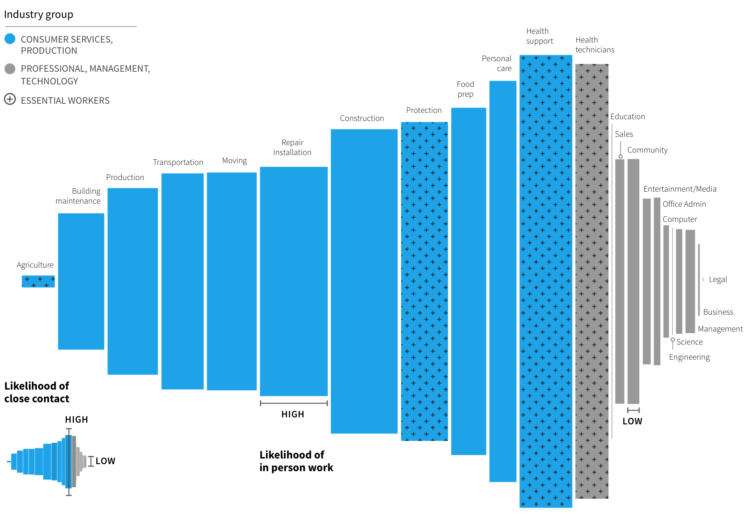 Some industries are more compatible with remote work than others. Jonathan I. Dingel and Brent Neiman at the University of Chicago estimated the scale of the differences. For Reuters, Sarah Slobin reports using a variable width bar chart to show likelihood of close contact with others against likelihood of in person work:

Professional, management and technology jobs run the gamut from accountants and architects to lawyers, insurance underwriters and web developers. This group is much more likely to retain the privilege of collecting a paycheck while working remotely, and is based in major metropolitan areas, like New York and Los Angeles.

Most Common Jobs, By State

Instead of looking at only the most common job in each state, I found the top five for a slightly wider view. You still see the nationally popular occupations — drivers, cashiers, and retail workers — but after the first row, you see more regional and state-specific jobs.

The sore thumb in this picture is Washington, D.C., whose top five ordered by rank was lawyers, management analysts, administrative assistants, janitors, and, wait for it, chief executives.

Next step: compare metro areas instead of states for something more apples-to-apples.

Working With Choropleth Maps and Shapefiles

Here’s a tutorial on how to make maps like the above.