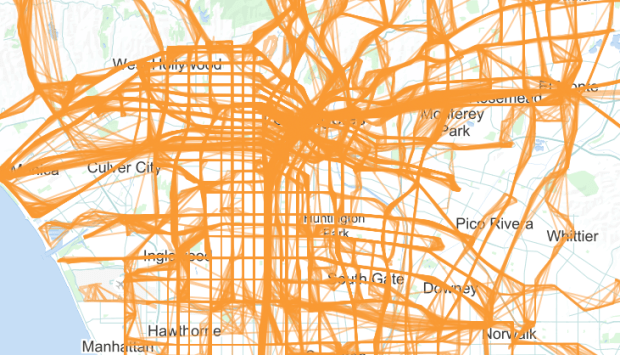 There is a realtime feed for the location of Los Angeles buses. It's a bit messy. Morgan Herlocker made it straightforward to aggregate. Have at it. [Thanks, @augustjoki]

From European cities, how long it takes to travel elsewhere 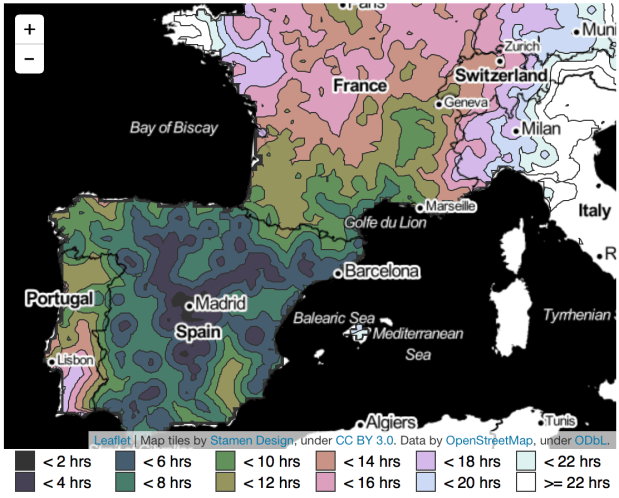 After seeing an isochrone map drawn by Francis Galton, Peter Kerpedjiev was curious if he could apply the method to travel times in Europe.

It conjured images of steam trains (were the trains in 1900 still running on steam?) chugging along between the imperial centers of Vienna and Budapest. It made me wonder about how people commuted from the train station to their final destination. It made me question my conception of how long it took to get from place to place. Most of all, however, it made me wonder what such a map would look like today.

Using data from the Swiss public transport API, Kerpedjiev built similar maps with major cities as starting points. Simply select a city, and the map shows how long it would take to get to areas in Europe.

I fully expect someone to do something similar for the US within a month. [via Guardian]

Why the subway isn’t getting a move on already 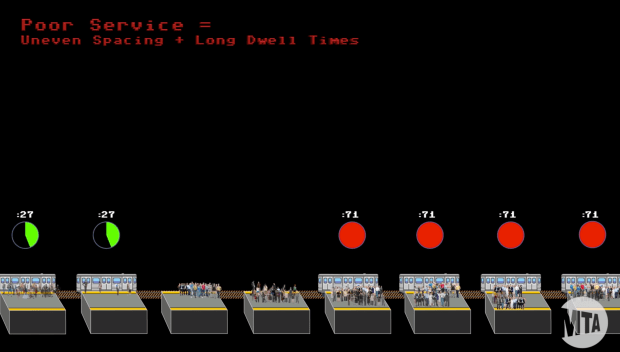 You're headed to the subway platform and you hear a train coming. The warm musty air that blows directly into your nostrils is near. So you speed up your steps. Oh forget it, who are you trying to impress? You run to make sure you get to the platform. Yes, you made it! You hop on with your heart rate up a few beats. Nice.

But the doors stay open.

As we've seen, it doesn't take much to throw off the schedule of a transportation system. Sometimes the weird delay you experience is just the system trying to make things better overall. [Thanks, @reconbot]

Why buses bunch at single stops 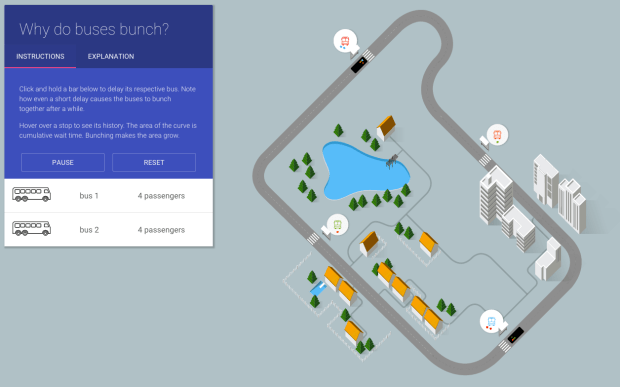 Maybe you've waited at a bus stop for longer than usual, and your bus finally shows up. And then, immediately after, a second bus on the same route pulls up right behind. What gives? Why can't they stay evenly spaced to improve everyone's waiting time? Lewis Lehe provides an explanation in a small interactive game.

Two buses travel along the same route, starting off in opposite positions. They make stops and pick up passengers right on schedule. But then add in your own small delays, and you see bunching relatively quickly. It really doesn't take much to throw off the equal spacing.

So the next time you find yourself in a bunching situation. Don't hate the driver. Hate the system.

See also Lehe's other interactive explainers on traffic gridlock and congestion. Lehe, by the way, is a PhD candidate in transportation engineering.