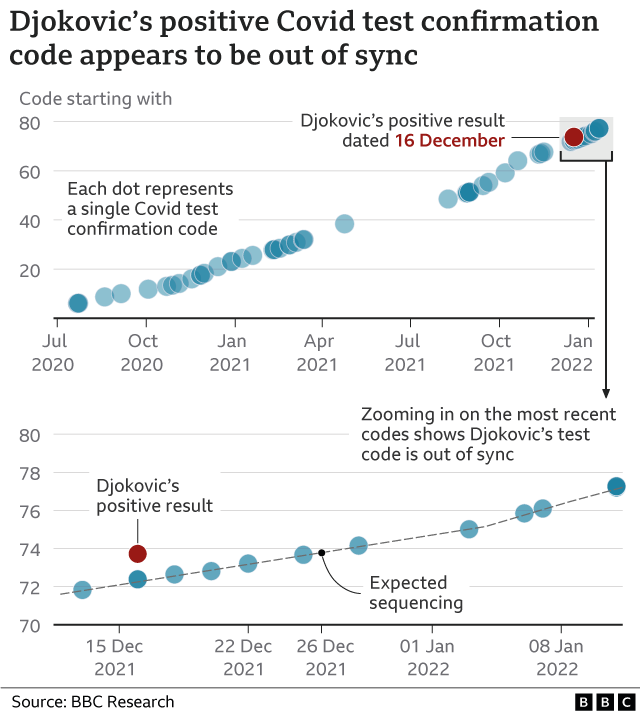 Tennis player Novak Djokovic is not vaccinated against the coronavirus, and as a result, was not allowed to compete in the Australian Open. Data collated by the BBC suggests that Djokovic lied about his Covid-19 test results in an attempt to get around rules:

The only outlier of all the confirmation codes we’ve plotted was Mr Djokovic’s positive test on 16 December.

Professional tennis player Roger Federer won his 20th Grand Slam title recently. He’s in year 20 of his career, and over time, he rose, he dominated, he declined, and he came back. Schweizer Radio and Fernsehen visualized Federer’s achievements over the years and compared him to other tennis stars in the process.

It reminds me of the Serena Williams piece by The Los Angeles Times a while back. This one is more refined though. I especially like the updating time series line that stays with you as you scroll. It shows where you are contextually, and provides progression for different parts of Federer’s career.

Serena Williams, greatest of all time

Serena Williams, who plays tonight in the U.S. Open semifinal, might be the greatest tennis player of all time. Kyle Kim for the Los Angeles Times provides a numbers rundown to make the case. 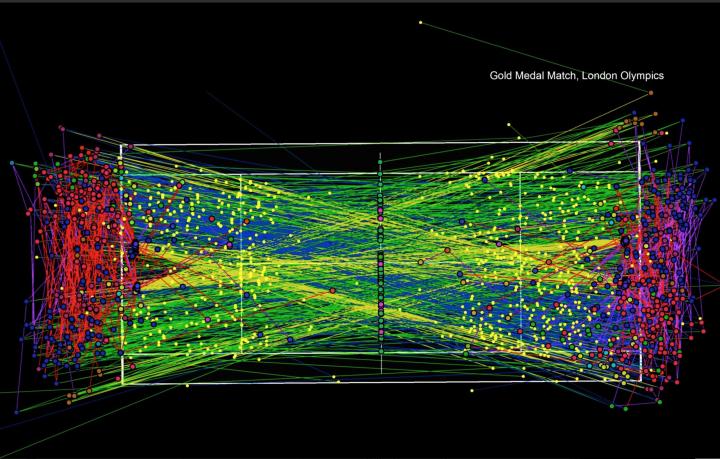 Damien Saunder, a cartographer at ESRI, likes to use mapping methods to evaluate tennis player patterns and tendencies.

When I look at tennis, I see it moving on a grid. I see space and x/y coordinates [position] and I see z values [height], and I see trajectories of the balls, and space opening up. I started GameSetMap to try and educate people of the value of mapping where people are on the court, storing the data in a GIS, and visualizing it.

Be a tennis line judge: Interactive tests your skills 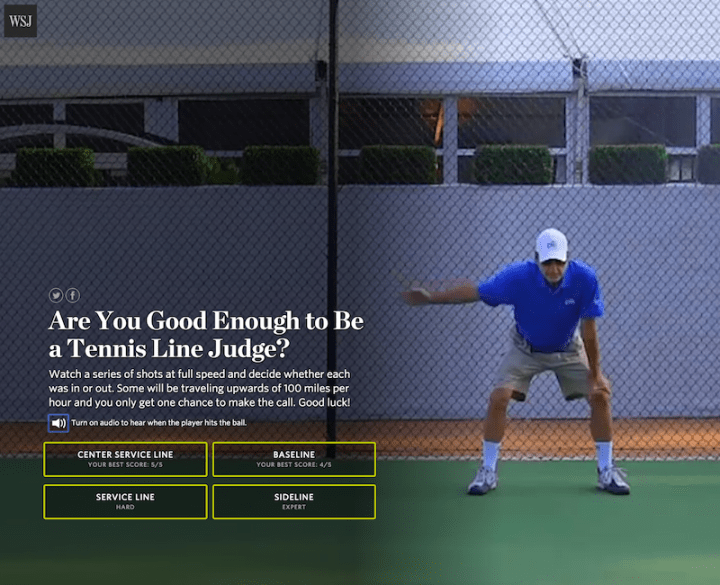 The job of a tennis line judge can be though when you have to judge the difference of a few millimeters as a ball speeds by. Sure, it's easy to complain about bad calls at home, where we get to see replays in slow motion, but it's more challenging in real life. The Wall Street Journal provides a bit of the experience with an interactive game. Watch video clips from a line judge's point of view, and try to make the right call.

See a 150mph tennis serve to your face

Hawk-Eye is a collection of technologies that allows high-granularity sports tracking, most notably in tennis. It's similar to what we see with basketball, football, soccer, and basically every sport where a lot of money is on the line. That means there's a lot of data to analyze gameplay these days.

The New York Times uses Hawk-Eye data to examine the serve. More specifically, they look at the fastest serve in tennis — coming at your face. Don't blink.