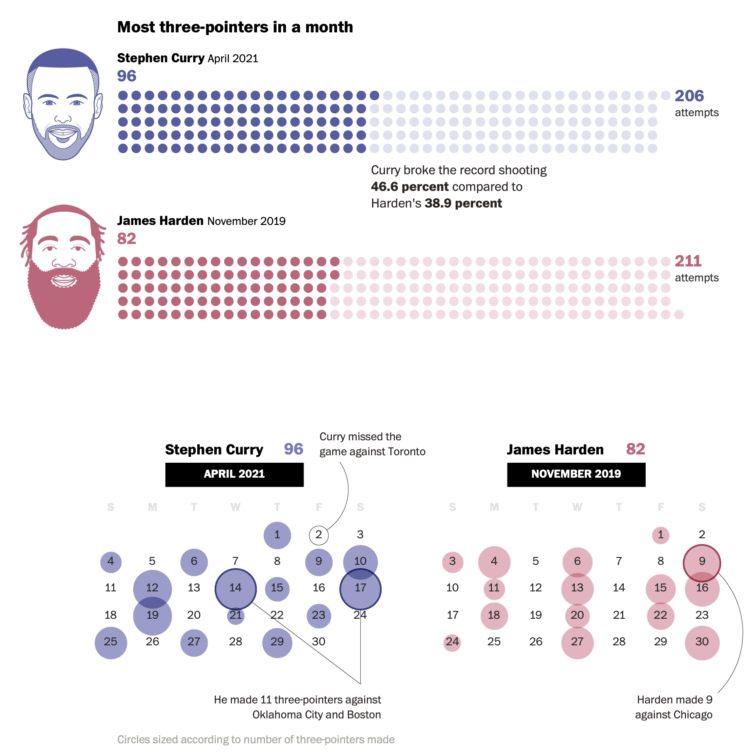 Steph Curry has been on a tear as of late. In April he made more threes than any NBA player ever has in a month. Ben Golliver and Artur Galocha for The Washington Post provide perspective on just how record-setting Curry’s current play is.

I’d be lying if I said it wasn’t satisfying to see half of the comparisons show how Curry has played better than James Harden.

I marked this article for later reading. It’s about Stephen Curry’s love of popcorn as a pre-game and half-time snack. Sounded amusing. Then I got to it and discovered that he scores every arena’s popcorn on a five-factor, five-point scale using a worksheet. Nice.

Give him the MVP on this factoid alone.

Stephen Curry for MVP, because he makes his teammates better the most 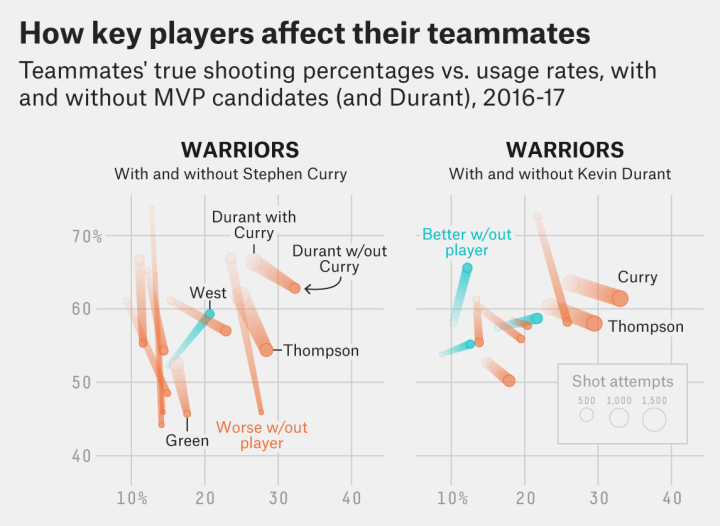 The choice for Most Valuable Player in the NBA is only minimally about the numbers, but it’s fun to look anyways. FiveThirtyEight makes the case for Stephen Curry. I particularly like the chart that shows how other players on a team fare when an MVP candidate doesn’t play.

Not only do virtually all of his teammates (10 of 11 players with at least 30 shots, representing over 1,700 shots taken without him3) shoot worse without Curry on the court to draw attention, they shoot dramatically worse. Overall, Curry’s teammates shoot 7.3 percentage points worse with Curry off the court, with his average teammate4 shooting 8.3 points worse. Among our MVP candidates, LeBron has the next-highest impact on average teammate shooting (3.9 points), followed by Westbrook (2.5 points). When it comes to opening up a team’s offense, Curry has no equal. 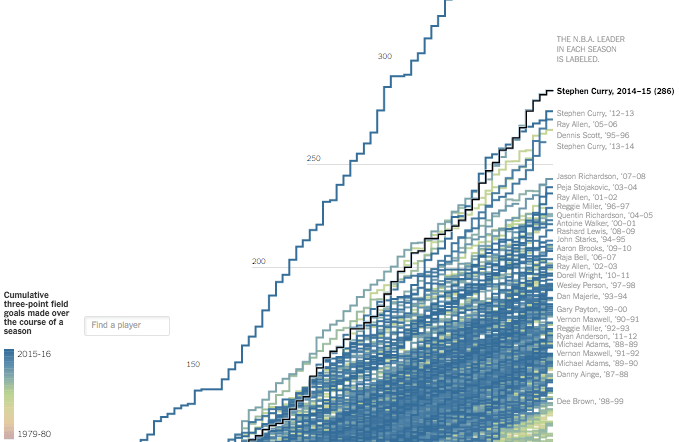 Stephen Curry made 402 three-pointers this regular season, which is ridiculous. Gregor Aisch and Kevin Quealy put the record into context showing just how much far ahead of others Curry was. No one has even made at least 300 three-pointers.

Robert O'Connell for the Atlantic ponders basketball analytics and the rise of Stephen Curry.

Like every sport, basketball has recently undergone a statistical overhaul. A new generation of analysts has pored over the game and come to conclusions about the efficacy of certain players and techniques. Their findings have met mixed acceptance from the old guard of coaches and executives, but at least one of their takeaways is now visible every night in the NBA. The three-point shot, for much of its history a novelty or minor part of teams’ strategies, has become an essential component of almost every team’s offensive attack. As recently as 2012, the average team took about 1,200 threes over the course of a season; last year, that number ballooned to over 1,800.

The difference between the Golden State Warriors and most other teams is that the shots go in, often in spectacular fashion. For this 2015-16 season, the Warriors put up more threes than anyone, but they made 41.5 percent of them so far, whereas everyone else is below 40.