Krisztina Szűcs used sets of animated triangles to show how each match played out. The triangles in the middle move up as each team scores, and the triangles on the side represent penalty kicks.

All the matches from Euro 2020 in one chart

To see all the matches from the group stage of Euro 2020 in one chart, Krist Wongsuphasawat used a streamgraph showing aggregate scorelines from kickoff to finish. All matches start at 0-0, and the team that scores first, colored in blue, almost always wins.

The percentage of comeback wins surprises me, as someone who knows almost nothing about soccer.

All the passes in soccer visualized at once 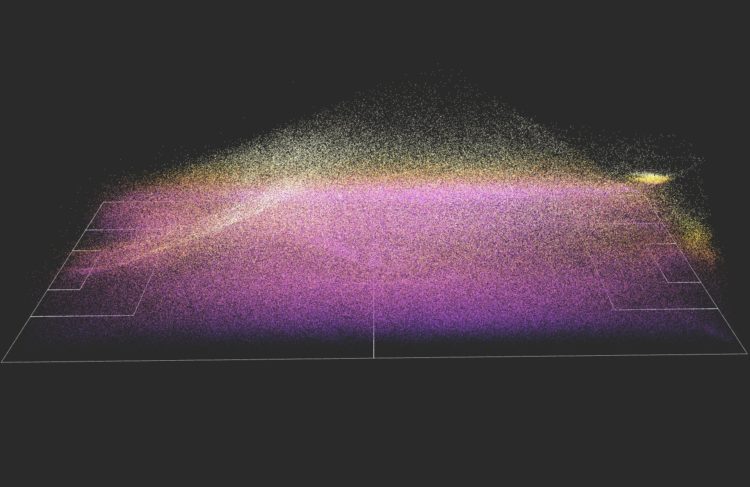 This is a fun soccer graphic by Karim Douïeb. It shows 882,536 passes from 890 matches across various leagues and seasons. It looks cool as a static point cloud, but be sure to check out the animated, interactive version which lets you isolate the view to specific parts of the field.

It reminds me of the Windows 3.1 fireworks screensaver. Those were the days.

You can find the data via StatsBomb, in case you want to play around.

Sports visualization and analysis tends to focus on gameplay — where the players are, where the ball goes, etc. In Reimagine the Game, the focus in on crowd noise through the course of a game. Pick a game and see the waves of noise oscillate through the arena during significant events.

It’s an advertisement feature on The Economist, which is kind of interesting, but it’s still fun to watch the games play out.

A fun experiment by Neil Charles that used the aesthetics of wind maps to represent World Cup 2018 play activity:

It looks like the familiar shape of an average football game, with the bulk of the play happening out wide and then converging onto the opponent’s area. Colour in this is example is by number of passes (hotter = more) and I’ve also drawn locations with fewer passes more faintly, but the aim is visual impact rather than strict best practice so I deliberately haven’t included a legend.

Clearly this has to be done for every other sport now.

Expected versus actual goals in the World Cup

Benjamin Pavard from France made a low-probability goal the other day. Seth Blanchard and Reuben Fischer-Baum for The Washington Post explain the rarity and use it as a segue into expected versus actual goals to gauge how teams have played.

This statistic can also tell us which teams are over and under-producing given their level of play so far, by comparing their expected goals and actual results. Surprise quarterfinalist Russia is the biggest overproducer, with an actual goal differential of +4 compared with an expected goal differential of -1.7. This can mean a lot of things. The team could be getting a bit lucky, or just playing extremely well in such a way that they finish more hard challenges than you would normally expect.

Seems right, I think. I mean, I have to take it at face value, as the sports world is essentially dead to me until basketball season starts again. 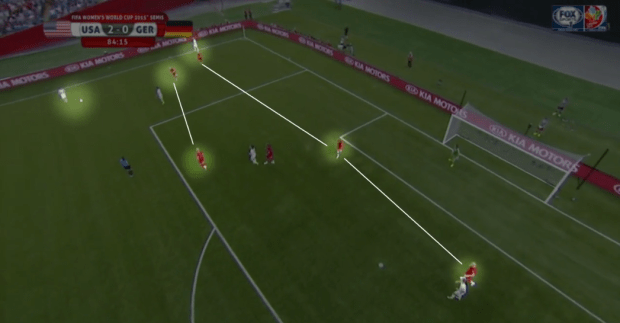 I know next to nothing about soccer. Like there's nothing, and then I'm sitting right there next to it. But, the New York Times provides an explanation of the U.S. women's current offense-focused strategy with some simple diagrams and a video, and I feel a little more edumacated.

I like the particular frame above that shows the gaps and seams that players try to attack. Basketball uses the same terminology, so I'm familiar, but this is the first time I've seen it so concretely.