Graphs before anyone knew what they were 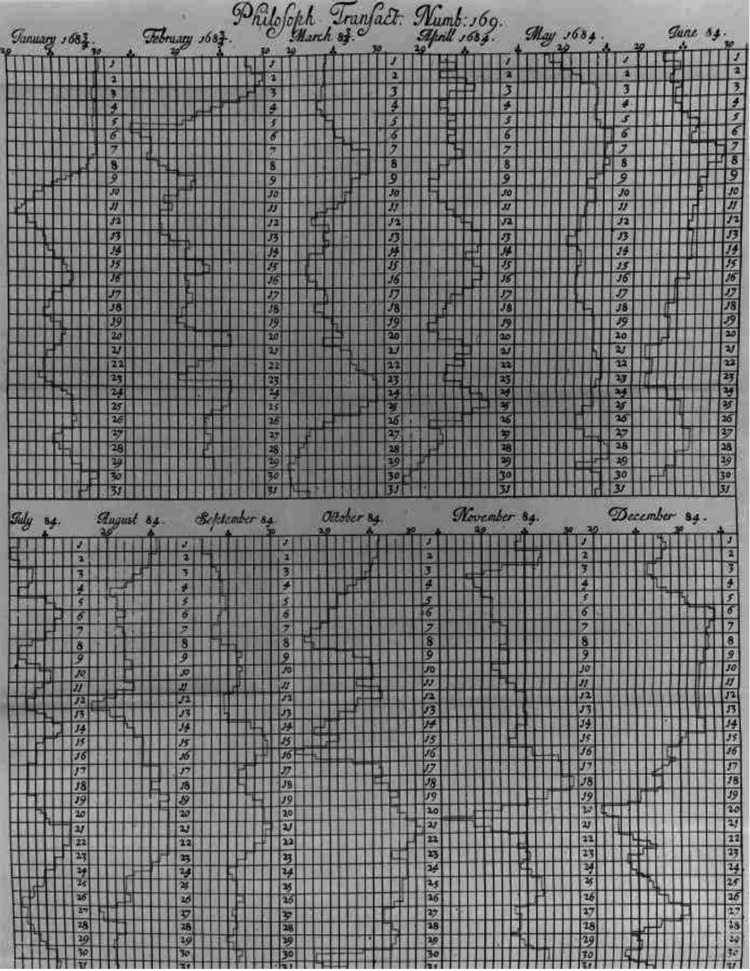 Michael Friendly and Howard Wainer have a new book out: A History of Data Visualization and Graphic Communication. They rewind back 400 years and discuss the beginnings of visualization, when nobody knew what a chart was. Putting this in my queue and hoping it’s back in stock soon. 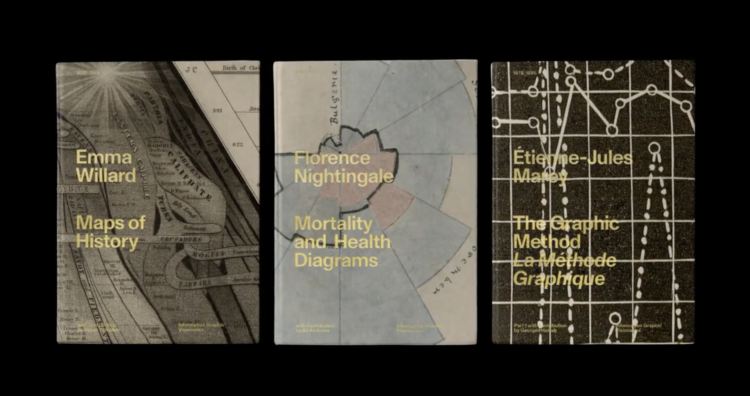 The Information Graphic Visionaries book series just launched on Kickstarter. Emma Willard, Florence Nightingale, and Étienne-Jules Marey are the subjects of three books, each including high-resolution images of the creators’ works and essays that provide historical context.

Whenever I’m feeling uninspired, I like to flip through old works. It always amazes me what past visualization practitioners were able to make without a computer. Oftentimes the detail and creativity surpass what we see these days. So Visionaries should be a fine addition to the library.

Just one day in and the Kickstarter is about halfway to the goal.

The Information Graphic Visionaries book series just launched on Kickstarter. Emma Willard, Florence Nightingale, and Étienne-Jules Marey are the subjects of three books, each including high-resolution images of the creators’ works and essays that provide historical context.

Whenever I’m feeling uninspired, I like to flip through old works. It always amazes me what past visualization practitioners were able to make without a computer. Oftentimes the detail and creativity surpass what we see these days. So Visionaries should be a fine addition to the library.

Just one day in and the Kickstarter is about halfway to the goal. 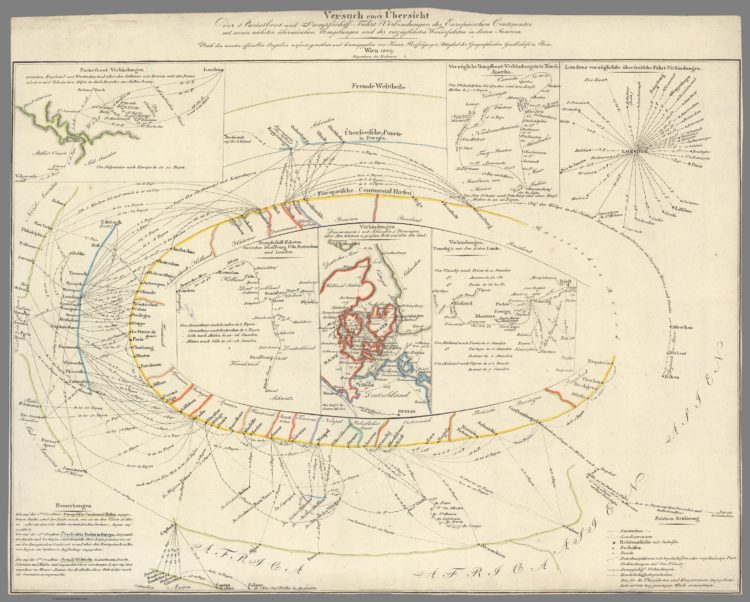 Data visualization leapt from its Enlightenment origins and into the minds of the general public in the 1760s. It cast more powerful spells throughout the following century. By 1900, modern science, technology, and social movements had all benefited from this new quantitative art. Its inventions include the timeline, bar chart, and thematic map. Together, these innovations changed how we understand the world and our place within it. Data visualization helped a new imagination emerge, wired to navigate a reality much bigger than any single person’s lived experience.

Bookmarking this for a closer look later.

The visualization work of W.E.B. Du Bois and his students has been on FD before, but it’s worth another look. In 1900, they put together a series of charts for a Paris exhibition visualizing black America. You can access the collection via the Library of Congress.

If you’re looking for more context for the charts and the times, Whitney Battle-Baptiste and Britt Rusert wrote about the history and motivations in W.E.B. Du Bois’s Data Portraits: Visualizing Black America. On the line chart above:

What appears to be another straightforward line chart is one of the most overtly political charts in the Georgia study. An undulating black line shows extrapolated property values in outline and actual property values in solid black crossing a red grid of squares. Tucked into the grid is a series of disquieting socioeconomic and political trends: the rise of the Ku Klux Klan and political unrest in the 1870s; new industrialism in the 1880s; followed by lynching, financial panic, disenfranchisement, and proscriptive laws in the 1890s. The diagram powerfully links the economic progress of black Georgians to larger regimes of violence against African Americans, pointing to the widespread disenfranchisement and dispossession of black people in the post-Reconstruction era.

Manuel Lima hosted a free online panel with Michale Friendly and Sandra Rendgen historical data visualization. It already happened, but you can listen to the archived version:

Human beings have been involved in the visual representation of information for thousands of years. While some books on Data Visualization go as far back as the 18th century, to what’s considered to be the golden age of information graphics, the history of the practice is much deeper. The participants on this panel have spent years exploring key characters and major contributions to the field of Data Visualization over many centuries. We will be discussing ancient visual metaphors, the challenges of doing research in this area, what we can learn from the past, and many other topics.

Stephen M. Stigler argues that data have a limited shelf life. The abstract:

Data, unlike some wines, do not improve with age. The contrary view, that data are immortal, a view that may underlie the often-observed tendency to recycle old examples in texts and presentations, is illustrated with three classical examples and rebutted by further examination. Some general lessons for data science are noted, as well as some history of statistical worries about the effect of data selection on induction and related themes in recent histories of science.

In a nutshell, while data itself doesn’t change, everything around it — the people who collected the data, the things that the data is about, and where the data came from — changes over time.

The early beginnings of visual thinking

Visualization is a relatively new field. Sort of. The increased availability of data has pushed visualization forward in more recent years, but its roots go back centuries. Michael Friendly and Howard Wainer rewind back to the second half of the 1800s, looking at the rise of visual thinking.

On the first construction of the periodic table of elements:

On February 17, 1869, right after breakfast, and with a train to catch later that morning, Mendeleev set to work organizing the elements with his cards. He carried on for three days and nights, forgetting the train and continually arranging and rearranging the cards in various sequences until he noticed some gaps in the order of atomic mass. He later recalled, “I saw in a dream, a table, where all the elements fell into place as required. Awakening, I immediately wrote it down on a piece of paper.” (Strathern, 2000) He named his discovery the “periodic table of the elements.”

I sometimes wonder what they will say about current visualization work a couple of centuries from now. At what point will the historians say, “This is when visualization crashed and burned, never to be seen again.” Or, maybe it’ll go the other way: “This is when everyone understood and communicated with data, and visualization was the vehicle to do it.”

What is R, what it was, and what it will become

Roger Peng provides a lesson on the roots of R and how it got to where it is now:

Chambers was referring to the difficulty in naming and characterizing the S system. Is it a programming language? An environment? A statistical package? Eventually, it seems they settled on “quantitative programming environment”, or in other words, “it’s all the things.” Ironically, for a statistical environment, the first two versions did not contain much in the way of specific statistical capabilities. In addition to a more full-featured statistical modeling system, versions 3 and 4 of the language added the class/methods system for programming (outlined in Chambers’ Programming with Data).

I’m starting feel my age, as some of the “history” feels more like recent experience.

You can also watch Peng’s keynote in the video version.

The role of cartography in early global explorations

For Lapham’s Quarterly, Elizabeth Della Zazzera turns back the clock to maps used for navigation, starting with the 1300s and through 1720:

From the fifteenth to the eighteenth century, European powers sent voyagers to lands farther and farther away from the continent in an expansionist period we now call the Age of Exploration. These journeys were propelled by religious fervor and fierce colonial sentiment—and an overall desire for new trade routes. They would not have been possible without the rise of modern cartography. While geographically accurate maps had existed before, the Age of Exploration saw the emergence of a sustained tradition of topographic surveying. Maps were being made specifically to guide travelers. Technology progressed quickly through the centuries, helping explorers and traders find their way to new imperial outposts—at least sometimes. On other occasions, hiccups in cartographic reasoning led their users even farther astray.

I particularly liked the part where in fourteen hundred ninety two, Columbus sailed the ocean blue — and made miscalculations because he misread the units on a map and ended up in the wrong part of the world.