More friendships between rich and poor might mean less poverty 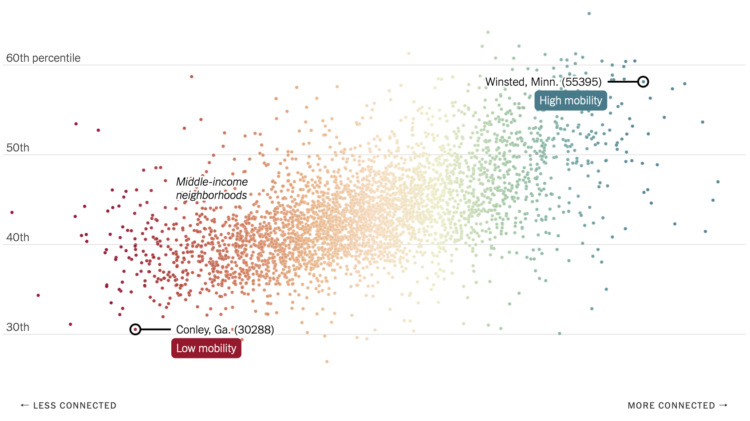 Recently published in Nature, research by Chetty, R., Jackson, M.O., Kuchler, T. et al. suggests that economic connectedness, or friendships between rich and poor, could improve economic mobility. The researchers used Facebook connection data from 70.3 million users, along with demographic and income data. NYT’s The Upshot explains the relationships with a collection of maps and charts.

You can find an anonymized, aggregated version of the data through the Social Capital Atlas. Also, I am very much into this socially-focused use of social media data.

The prices of everything seem to be rising a lot lately. Why? For Vox, Emily Stewart uses eggs as a case study to explain:

“There are different ways of thinking about the inflation issue, and economists by default tend to think about macroeconomic issues such as inflation in macroeconomic terms,” said Isabella Weber, an economist at UMass Amherst. “In this current situation that we are facing, we basically have very strong micro dynamics, that is dynamics on the level of specific sectors that translate into a more general kind of price pressure.”

Million dollar blocks and the cost of incarceration 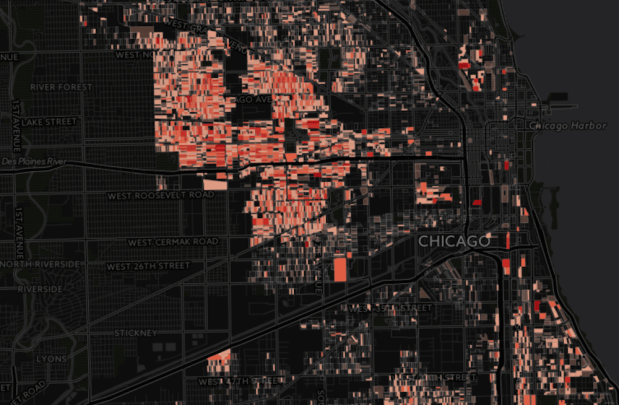 Incarceration costs a lot of money. We know this, sort of. But how much really? Million Dollar Blocks, by Daniel Cooper and Ryan Lugalia-Hollon, estimates the cost in Chicago, down to the block level.

The map is based on data obtained by the Chicago Justice Project from the Cook County Circuit Court. It represents all adult convictions between the years of 2005-2009. For each conviction, we have data for what the offense was, the length of the sentence, and the offender's residential address.

We derive dollar amounts from sentence lengths. Our cost assumption is that, on average, the Illinois Department of Corrections spends approximately $22,000 per year for each inmate. Life sentences are calculated based on average life expectancy.

As you might expect, a bulk of arrests occur in concentrated areas, hence the name of the project. Darker red means higher estimated costs.

Spending numbers appear in the bottom right corner when you mouse over blocks, but the map could use a legend to get a better sense of scale. It'd be especially helpful when you switch between all offenses and just drug-related ones. When you switch from the latter (the default view), which is a subset of the former, over to all offenses, the map becomes less red. But the spending is actually more.

Anyways, I hope they work on this more. It's a good concept, and naturally, I'm wondering what it's like in other places.

Loans from Freddie and Fannie that defaulted after the bubble 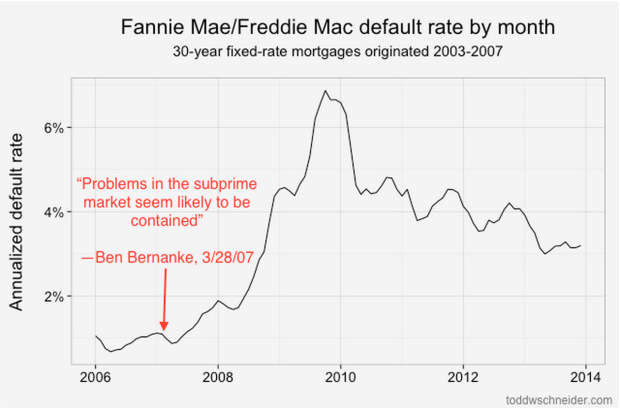 Under the directive of the Federal Housing Finance Agency, started to release detailed loan-level data in 2013. Todd W. Schneider looked at the data recently, evaluating default rates — the proportion of loans that fell into deliquency — with a bit of geography.

California, Nevada, Arizona, and Florida were in particularly bad shape during the 2005 through 2007 bubble. Some counties had more than 40 percent of loans default. I don't know much about loans, but that seems high. And there was plenty of contrast as you evaluate nearby areas.

It's less than 100 miles from San Francisco to Modesto and Stockton, and only 35 miles from Anaheim to Riverside, yet we see such dramatically different default rates between the inland regions and their relatively more affluent coastal counterparts.

Aside from the analysis though, maybe the most interesting bit is Schneider's previous experience as a mortgage analyst and the contrast of analysis a few years ago to now.

Between licensing data and paying for expensive computers to analyze it, you could have easily incurred costs north of a million dollars per year. Today, in addition to Fannie and Freddie making their data freely available, we’re in the midst of what I might call the “medium data” revolution: personal computers are so powerful that my MacBook Air is capable of analyzing the entire 215 GB of data, representing some 38 million loans, 1.6 billion observations, and over $7.1 trillion of origination volume. Furthermore, I did everything with free, open-source software. I chose PostgreSQL and R, but there are plenty of other free options you could choose for storage and analysis.

You can check out the code on GitHub. [Thanks, Todd] 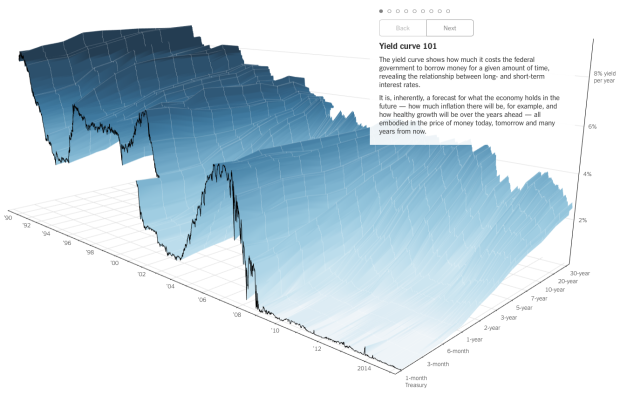 People like to poke fun at 3-D charts, mostly because they don't work or a third dimension just isn't needed. However, this chart by Gregor Aisch and Amanda Cox for the Upshot is a fine exception to the rule.

It is a yield curve that shows "how much it costs the federal government to borrow money for a given amount of time" which tends to be a good indicator for where the economy is headed. Time is shown on the horizontal axis, and percentage yield per year is shown in the vertical. The rates for 3-month, to 6-month, up to 30-year loans are shown in the depths of the chart.

With just the initial view alone (shown above), I think the chart confuses many, but the tour of the data at different angles accompanied by explanations make it work. For example, the next step in the narrative transitions to a single timeline to see rates at the time of publication. 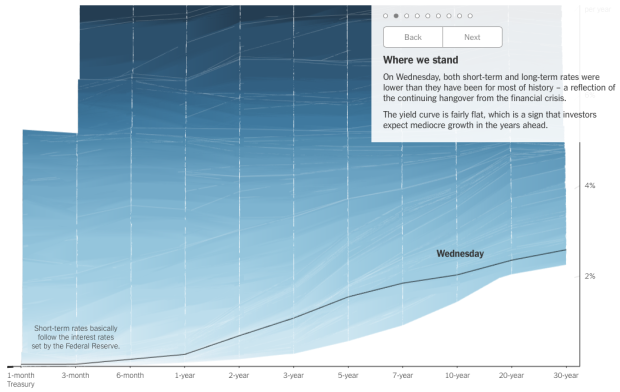 The smooth transitions at callouts at each step help keep you oriented. Plus, you can rotate the chart yourself by clicking and dragging. 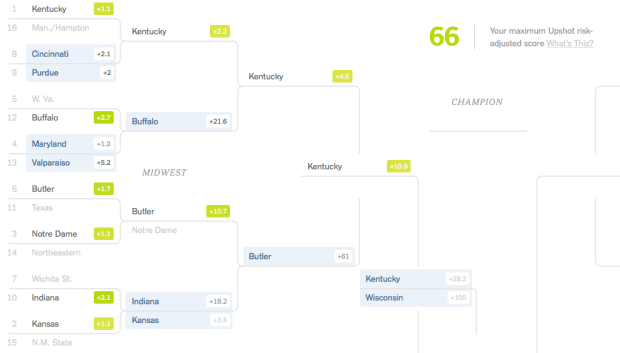 Unlike traditional bracket-picking, the Upshot's bracket game has a twist. You still want to pick the winners, but you get rewarded extra points if you choose a winning team that's less of a crowd favorite.

It's a more interactive bracket than most. It will award points based on the same economic principles behind the stock market, the real estate market and most of the American economy: the principles of supply and demand. The more unusual that your picks are, the more points you'll receive (so long as those picks are correct). We reward people who take the road less traveled to Indianapolis, site of this year’s Final Four.

Make your picks. To make things interesting, the Upshot is running a contest. The person (who officially enters the contest) with the highest score wins an Apple Watch.

Of course, now all I want to see is everything in between: the distribution of earnings of these two groups and the middle group between 90 and 1 percent. Good thing you can download some of that data yourself from the World Top Incomes Database.