As one might expect, many women, people of color, and L.G.B.T. candidates are running in this year’s midterms. It’ll be one of the most diverse elections in U.S. history. The New York Times provides a scrolly breakdown with 410 cutout faces floating around on your screen.

Mapping a diverse but segregated America

Aaron Williams and Armand Emamdjomeh for The Washington Post delve into diversity and segregation in the United States. The boiling pot continues to get more ingredients, but they’re not mixing evenly.

Some 50 years ago, policies like the Fair Housing Act and Voting Rights Act were enacted to increase integration, promote equity, combat discrimination and dismantle the lingering legacy of Jim Crow laws. But a Post analysis shows that some cities remain deeply segregated — even as the country itself becomes more diverse.

I like how you can easily toggle between diversity and segregation. It allows for a quick comparison of metrics that aren’t always clear-cut.

Scroll to the end to see how diversity and segregation compare in your area.

Statistical diversity in US newsrooms

If a news organization wants to talk about the world in a fair way, it needs points of view from a group of people who are representative of said world. Otherwise, bias comes to play no matter how hard you try. Google Trends looks at the how different groups are represented in major news organizations across the country. 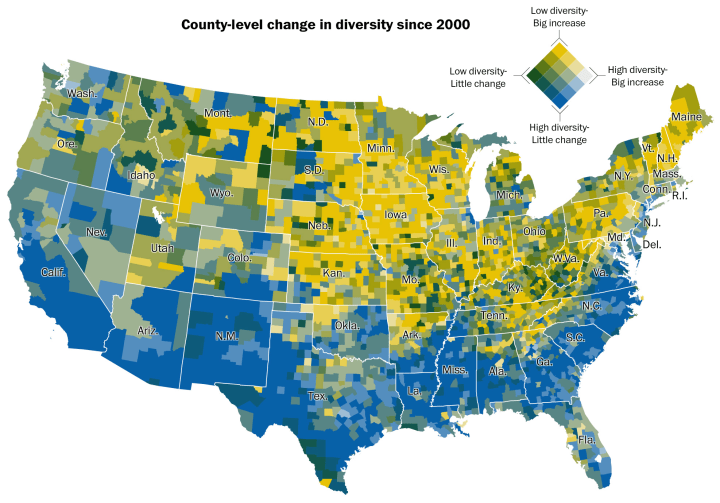 Dan Keating and Laris Karklis for The Washington Post map the change in diversity since 2000. The color scale, shown in the top right, represents two things: level of diversity and change in diversity. I’m not so sure the dual scale is interesting as a whole, as my brain just wants to split out each category individually or see each one separately. But keep scrolling and you can get that separation, which is a lot more visually helpful.

Diversity percentages for US schools 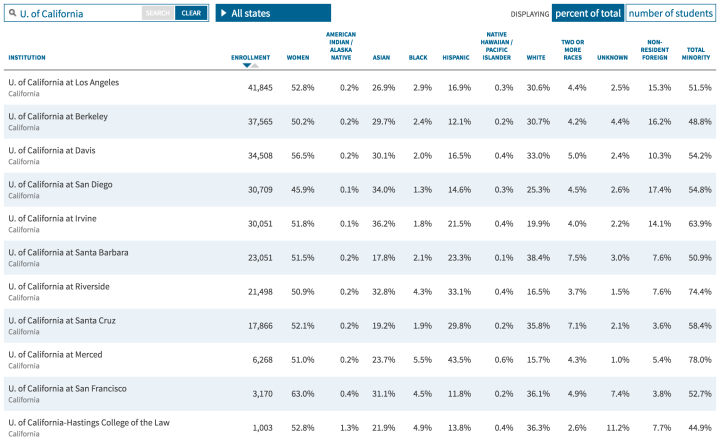 Based on 2014 estimates from the U.S. Department of Education, the Chronicle of Higher Education compiled a straightforward searchable and sortable table that shows the race percentages for more than 4,600 institutions.