As you might expect, NASA collects a lot of data, and much of it is seasonal. Eleanor Lutz animated a few maps to show the detail:

Check out the final result. And, if you want to make your own, Lutz published her code on GitHub.

Average view of Earth from space

The Earth Puzzle by generative design studio Nervous System has no defined borders. You put it together how you want.

Start anywhere and see where your journey takes you. This puzzle is based on an icosahedral map projection and has the topology of a sphere. This means it has no edges, no North and South, and no fixed shape. Try to get the landmasses together or see how the oceans are connected. Make your own maps of the earth!

Get it here. There’s also one for the moon.

Here’s a fun piece by Andy Bergmann that shows the timeline of Earth. It’s a long-ish, straightforward scroller that vertically spaces significant events during the history of the planet. You start with the formation of Earth 4.6 billion years ago and work your way up to present day.

In a spin on the view of ancient Earth and the shift of the continents, Ian Webster made a globe where you can enter a location and see what was in that spot millions of years ago. Not all addresses were working for me at the time, so you might want to try a major city if it’s doing the same for you. [via kottke]

Temperature simulation near the Earth’s core

Researchers are building models to simulate the Earth’s core. From CNRS News:

Take a journey to the center of the Earth—as far as its outer core, at least—and you’ll find a swirling mass of metal, mainly iron, kept in liquid form by the region’s intense heat. Temperature and pressure variations across this layer cause the melted metal to rise in hotter zones and to sink in cooler ones—convection movements that generate electric currents through the metal, and in turn, magnetic fields. Pair these convective motions with the Earth’s rotation on its axis and you have a large-scale dynamo effect: the spinning aligns the convective motions which now cooperate to produce one big magnetic field, ultimately creating the shield that blocks out solar wind.

I’m still not entirely sure what I’m looking at, but I like it.

Time-lapse from space by NASA:

On July 20, 2015, NASA released to the world the first image of the sunlit side of Earth captured by the space agency’s EPIC camera on NOAA’s DSCOVR satellite. The camera has now recorded a full year of life on Earth from its orbit at Lagrange point 1, approximately 1 million miles from Earth, where it is balanced between the gravity of our home planet and the sun.

I don’t care how many time-lapse videos from space I’ve seen already. I will always want more. [via kottke] 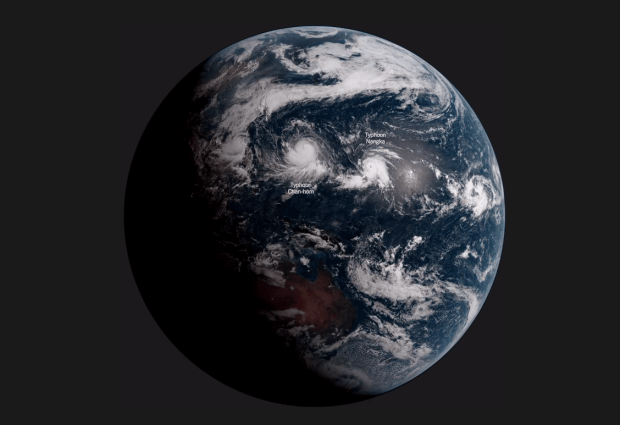 Japan has a new weather satellite in stationary orbit, Himawari-8, that takes a picture of Earth every ten minutes. String those together and you get a super-detailed time-lapse video of the living planet, which is what Derek Watkins from the New York Times did.