I was curious who played for a single team over their entire career, who skipped around, and how the patterns changed over the decades. Read More

It seems like there’s been more player movement than usual over the years. Didn’t players used to play on a single team for the entirety of their careers? Read More

Products with tariffs in the trade war

The trade war started in January of this year when the administration imposed tariffs on 18 solar panel and washing machine products. Then the United States imposed more, and countries returned the favor on U.S. products, which ballooned the product count to 10,000. Keith Collins and Jasmine C. Lee for The New York Times chronicled the shifts with force-directed bubbles.

So many bubbles. Maybe we should just get it over with and impose tariffs on all the things now. 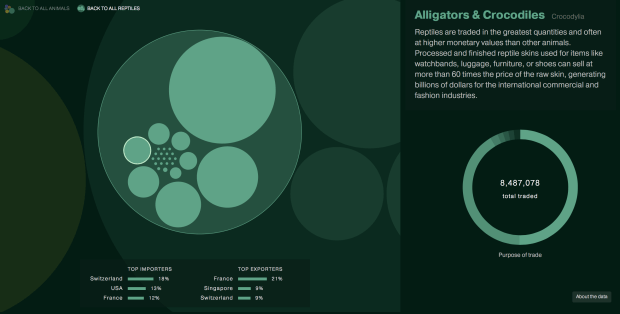 Based on data from the CITES Trade Database, "more than 27 million animals were traded internationally in 2013 for purposes ranging from garment production to traditional Chinese medicine, trophies, and scientific testing." This National Geographic interactive by Fathom Information Design shows the various species that were traded and to what extent.

Using packed circles, the data is shown in a hierarchical format, with large animal groups, such as reptiles, bird, and mammals shown initially. Click on circles to drill down to specific species. Countries responsible for importing and exporting are shown, along with the purpose of trade.