Usually Kalina’s videos are a straight up time-lapse using every photo. But in this collaboration with Michael Notter, 7,777 Days shows a smoother passage of time. Notter used machine learning to align the face pictures, and then each frame shows a 60-day average, which focuses on an aging face instead of everything else in the background.

Search history can say a lot of about a person, like where they’re going, where they want to be, what they want to learn about, or what they’re trying to make — at some point in their life. Search Record, by Jon Packles, is a way to parse through your history. Download your archive, import it into the locally-run tool, and explore.

I’m more of DuckDuckGo person, so I can speak to the specificity of the tool, but it looks insightful. At the least, I’d want to download my search archive and play around with it. 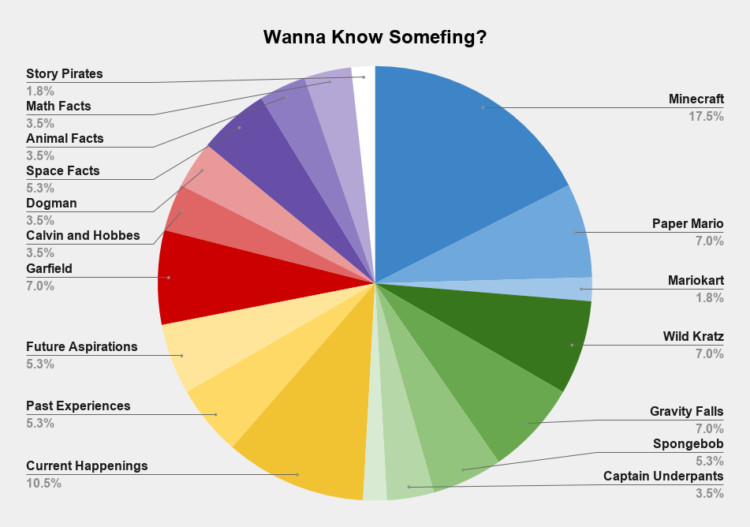 From Reddit user wequiock_falls, “What I’m about to learn about after my kid says, ‘Wanna know somefing?’ Data collected over the course of 7 days.”

Cycling and mapping all the streets in London

Davis Vilums set a goal to cycle every street in London on his way to work (without being late). After four years, he accomplished his goal:

I am a passionate cyclist, and I love the streets of London. Most of my travels are daily 25-minute rides to work. Over time my route became boring. I decided to make it a little bit more interesting by taking the parallel streets on my way there. I bought a map of central London and started to colour in the streets to mark the routes that I have taken. And then I got obsessed with it.

Man takes picture of himself every day for 20 years

In 2007, Noah Kalina posted a time-lapse video showing a picture of himself every day for six years. Pop culture swallowed it up. There was even a Simpsons parody with Homer. After another six years, it was a video for twelve years’ worth of photos. Kalina has kept his everyday project going, and the above is the new time-lapse for two decades.

This brings back graduate school memories for me as I argued for personal data collection as a diary instead of just for quantified self. I often led with Kalina’s project as a primary example. He ages, his background changes, and his camera improves, but the angle stays the same.

It’s a very tiny window into his life, played out over time, but I bet for Kalina it means a bit more. [via kottke]

Schedule change with a baby

It’s difficult to emphasize how much life changes when a child comes into the picture. Caitlin Hudon made a chart to show how her daily schedule shifted dramatically.

For a while, it seems like all of your free time is gone for good, but ever so slowly, you get a little bit of it back as they grow more independent.

A quick annotation by Jonnie Hallman on Twitter: “GitHub is really good at visualizing burnout.”

With terminal cancer, a patient tracks drug dose in a dashboard over her final days

Kelly Martin died of cancer on September 30. She was able to enjoy her final days at home, and as she knew the end was near, she kept track of her drug doses in a dashboard:

Brain tumors are unpredictable. I don’t want my last days with a personality that isn’t mine. I wanted to laugh, to enjoy the days, and fart around in the garden as much as possible. We added in a variety of medications to use as needed to manage symptoms and tracked what worked and what didn’t in a Tableau dashboard. It was the only way to see the patterns and to get more good days.

From Bridget Cogley, Martin’s friend who took over the writing as Martin grew too ill:

63% of Canadians with a terminal illness want to die at home. Only about 15% do. Kelly Martin died on September 30, 2019 in her home with her son and me (Bridget) at her side and her mother on the phone. A true honor she gifted us knowingly. We used this dashboard to provide care and communicate with providers. It was crafted in a couple of hours, edited with Kelly’s feedback, and used to provide a better death. Seeing the data can truly be life-changing.

GitHub is meant to track code

Jen Luker noted, “As amazing as @github is, it is a tool designed to track code, not people. I’m sharing my annotated GitHub history to show you what it can’t tell you about a developer.”

As amazing as @github is, it is a tool designed to track code, not people. I'm sharing my annotated GitHub history to show you what it can't tell you about a developer. pic.twitter.com/b94kYqQHaZ

Data as footprints? Footprints can tell you where someone went, but you have to evaluate surroundings to figure out what he or she did along the way. And there’s a lot that can happen between when the footprints set and when you find them.

I marked this article for later reading. It’s about Stephen Curry’s love of popcorn as a pre-game and half-time snack. Sounded amusing. Then I got to it and discovered that he scores every arena’s popcorn on a five-factor, five-point scale using a worksheet. Nice.

Give him the MVP on this factoid alone.