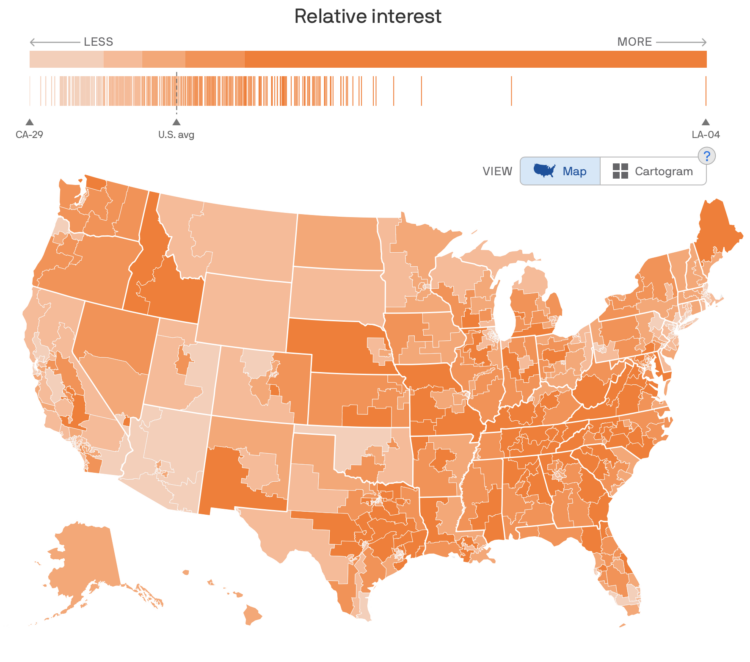 To estimate public interest in the many political issues across the United States, Axios used Google Trends data to map issues by congressional district. Switch between the many topics, and you see a choropleth map (that can change to a cartogram), along with a barcode chart to show the distribution of interest among all districts.

I’m not sure if it’s that beneficial to see the overall geographic distributions for most topics, but it’s useful as a point of reference to look at specific districts. For me, the barcode chart is the most interesting with the distributions shifting quite a bit from topic to topic.

Stat-driven view on how American conservatives shifted against vaccine

As we know by now, conservatives in the U.S. are more commonly against getting vaccinated for Covid, but it wasn’t always like that. Vox shows how ideas shifted to get to where we are now.

The 1990s elementary school aesthetic with markers and overhead projector slides works well here. The choices guide you step-by-step through the data points. 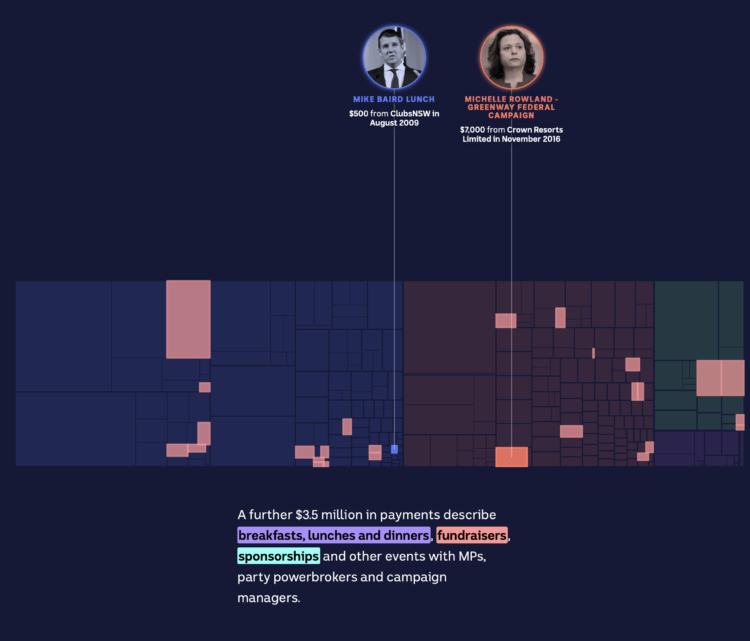 The Digital Story Innovation Team for ABC News in Australia looked at political donations from the gambling industry. The piece goes all-in with treemaps in a scrollytelling format to show categories and individual donations.

It starts with an individual point and keeps zooming out more and more. Then when you think it’s done, it zooms out more.

Terror has reduced our rights and freedoms and given the ruling classes power over dissent. So says the Guardian opinion piece by Julian Borger. And…

Center for Responsive Politics and National Institute on Money in Politics are merging their datasets to make it more accessible:

The nation’s two leading money-in-politics data organizations have joined forces to help Americans hold their leaders accountable at the federal and state levels, they said today.

The combined organization, OpenSecrets, merges the Center for Responsive Politics (CRP) and the National Institute on Money in Politics (NIMP), each leading entities for three decades. The merger will provide a new one-stop shop for integrated federal, state and local data on campaign finance, lobbying and more, that is both unprecedented and easy to use.

Good. More important than ever.

See if you live in a political bubble 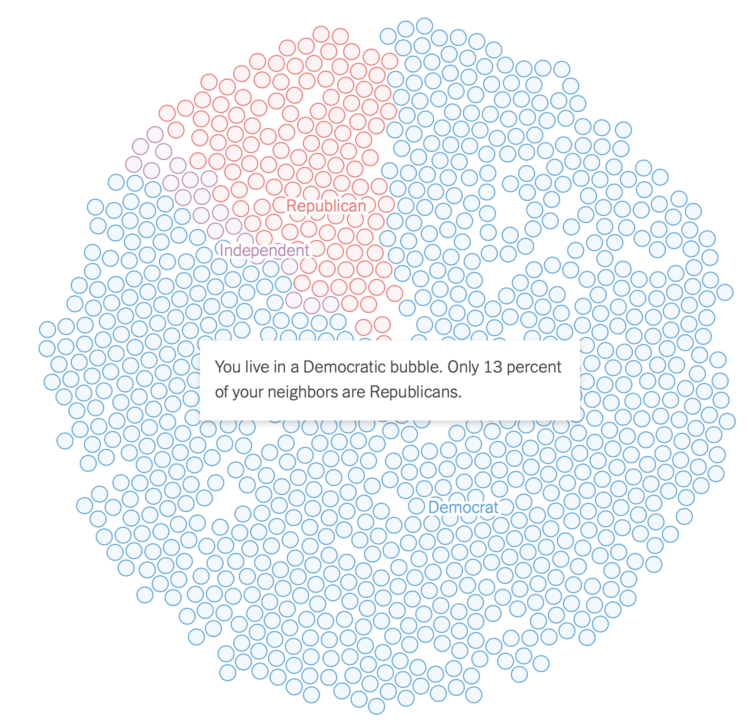 Gus Wezerek, Ryan D. Enos, and Jacob Brown for NYT Opinion use neighborhood-level data to show how those around you voted in the 2020 election. They ask: do you live in a political bubble? Enter an address to see.

This is riffing off of NYT’s similarly-themed map from 2018, which asked the same question but answered more geographically. This newer version, as is the current way of doing things these days, is more bubbly and mobile-focused with the scroll format.

See also how the work came together.

I prepared this for my students and thought others might like it. It’s a timetable of environmental law, politics, publications of note, events and disasters…
END_OF_DOCUMENT_TOKEN_TO_BE_REPLACED

Posted by John S. Wilkins in Ecology and Biodiversity, Politics

Rachael Dottle, for FiveThirtyEight, looked for political differences in cities and ranked them, based on precinct voting margins for the 2016 election:

To see just how politically segregated America’s urban areas are, we used each city’s 2016 election results to calculate its dissimilarity index — basically, a number that tells us how separated its Republicans and Democrats are from one another, with higher numbers indicating more segregation. This technique is most often used to measure racial segregation, but political scientists have also used it to calculate partisan segregation. (One drawback of this method: A place that votes almost uniformly for one party — Democrat-soaked San Jose, California, for example — will have a low dissimilarity score. But that doesn’t mean Republicans and Democrats live next to each other in these places; it may just mean that the larger region is politically segregated, leaving the whole city as essentially a one-party enclave.)

The Upshot asked a similar question last year using similar data and mapping scheme, but they framed it differently.

In coming days and weeks we are again going to be bombarded with the usual clichés about the economy. This or that will be good…
END_OF_DOCUMENT_TOKEN_TO_BE_REPLACED