Tips on Nominating an Article for the $5,000 PLOS Genetics Research Prize 2018

post-To help you nominate your chosen article, we’ve provided some helpful tips in this post. We look forward to your involvement – review the program information and submit your nomination(s)! Last month, PLOS Genetics

PLOS Biology in the media – May

PLOS Biology in the media – May   post-info This year is flying by, and May was another bumper month at PLOS Biology. In May we’ve covered all things hair, mind-controlled avatar races, and plant 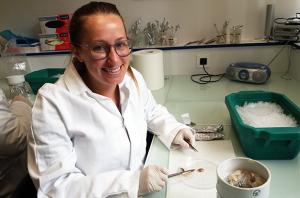 When I applied to APHL’s Infectious Diseases Laboratory Fellowship in 2017, I had no idea I’d find myself spending three weeks in Nantes, France, with a leading expert in norovirus detection in oysters. While I love to travel, and France had been on my list of places to explore, I never anticipated that I would have this opportunity during my fellowship or that the opportunity would be made possible through the network of researchers connected through it.

I began my year-long fellowship at the Massachusetts Department of Public Health State Laboratory last summer. Less than a year before, the state faced a norovirus outbreak linked to consumption of raw oysters from Wellfleet, MA. Oysters are filter feeders, so whatever is in their surrounding environment will filter through their body and possibly bioaccumulate, (i.e., accumulate in the oyster rather than being excreted). When people eat the oysters raw, they can be exposed to a potentially infectious dose of the virus.

The state public health lab did not have a protocol to test oysters for norovirus, so I was tasked with this project. I was invited to visit the Shellfish Purification Plant in Newburyport, MA, which is the oldest depuration facility in the world and the largest in the US. I thought this hour and a half trip to the tip of Plum Island on the north shore of Massachusetts would be the furthest I would travel during this fellowship, and was happy to enjoy this fascinating field trip.

As part of my research, I began contacting experts in similar fields. Upon connecting with an international expert in norovirus detection in oysters, I was invited to visit and train at IFREMER, a French research and national reference lab. I was thrilled to accept!

A few months later I was in Nantes, France, a beautiful and green city on the Loire River, approximately 30 miles inland from the western Atlantic coast. There I spent three weeks learning the ISO method for detection of norovirus in oysters along with another visiting researcher from Morocco. I also learned about other research projects at the lab, and its responsibilities as a national reference lab.

On my second day there, the public transportation workers went on strike, so I joined some of the lab scientists and walked to work through the morning mist on a forest trail. I happened to mention that it was my birthday that day, and soon one of the students had organized a group dinner to celebrate. I gained a strong sense of inclusiveness from the group and had a truly memorable experience. It was wonderful to be able to ask as many questions as I wanted about their work (sometimes with the aid of Google translate because my French was quite limited), which was enormously helpful for my own project.

From my time training in the IFREMER lab, I learned the nuances of dissecting out the digestive tissue of an oyster, as well as two different homogenization and ribonucleic acid (RNA) extraction techniques. It was an opportunity to work with people that routinely work with both oysters and norovirus. While I could have read and interpreted the protocols from Massachusetts, it was extremely helpful to observe the intricate steps and ask the experts questions to fully understand the protocol. I’m now back in Massachusetts and have implemented much of what I learned into my project.

Once I returned and shared my experience with friends and family, they had one question for me: Do I still eat oysters? I did eat oysters but then I started finding live pea crabs inside them. Pea crabs are a parasite in the oyster and I felt they represented a large physical manifestation of all the other potential parasites, bacteria or viruses that can reside in oysters. That was enough to make me avoid them, at least for a while. I might begin eating them again after I complete this project; I’m still young and have a relatively good immune system to protect me from whatever might be lurking in an oyster!

The post How my fellowship and an interest in oysters took me to France appeared first on APHL Lab Blog.

PLOS Biology in the media – April

post-info April was a truly diverse month at PLOS Biology. This month we are talking about gravity-defying fungi, representation of endangered species in the media, gender gaps and information gaps in scientific research and why

Health communication and marketing campaigns that promote positive behavior change are a cornerstone of public health and behavioral science. Designing and implementing quality campaigns on a tight budget and in an urgent timeframe is a challenge that most health communication professionals share. Research and evaluation are critical for a successful campaign. CDC is using leading research and evaluation methods to develop quality campaigns, while keeping costs low and sticking to tight timelines.

A great example is CDC’s design and implementation of The Domestic Readiness Initiative on Zika Virus Disease, also

known as the Domestic Zika Campaign. This bilingual digital campaign sought to increase Zika awareness among the general population and expectant parents in the United States and its territories. Campaign messages were also developed to change knowledge and attitudes regarding Zika transmission, beliefs about the risks of Zika, and the perceived ability (self-efficacy) to protect oneself against Zika.

CDC identified several methods to get tailored messaging to our target audiences. Based on the work for this campaign, there are 10 methods that can help you reduce costs and improve the efficacy of your communication or health marketing campaign.

Do you have any other suggestions to improve the quality and timeliness of health marketing and communication campaigns on a budget? Please leave a comment below.

Fred Fridinger is a Senior Health Communications Specialist in the Office of the Associate Director for Communication (OADC). During his 22- year career at CDC, he has worked on various campaigns and communication efforts, including those addressing moderate physical activity and healthy eating, genetics, chronic fatigue syndrome, and Zika prevention. In his current position, he oversees the market research function for OADC, which involves the Porter Novelli Styles and Nielsen Scarborough syndicated data bases.

PLOS Biology in the media – March

0000-0002-8715-2896 PLOS Biology in the media – March   post-info March has been a bumper month at PLOS Biology with lots of research hitting the press. A selection of our top picks this month include

0000-0002-8715-2896 The XV Collection: How Bats Land Head-Over-Heels   post-info by Anders Hedenström Flight in animals is energetically very costly, but because of its speed it can result in an overall relatively low cost of