For those unfamiliar with SandDance, it was introduced nearly four years ago as a system for exploring and presenting data using “unit visualizations.” Instead of aggregating data and showing the resulting sums as bar charts, SandDance shows every single row of a dataset (for datasets up to ~500K rows). It represents each of these rows as a mark that can be colored and organized into different areas on the screen. Thus, bar charts are made of their constituent units, stacked, or sorted.

Nice. I hadn’t heard about SandDance until now, but I’m saving for later. You can grab the source on GitHub.

The Unitary Fund: a no-strings attached grant program for Open Source quantum computing   Posted August 20, 2018 by post-info This is a Guest Post written by Will Zeng. Editorial Note: As part of our

poWe, @PLOS, @PLOSONE and the open source community, will discuss why and how to #ShareYourCode in a tweet chat on 25 April, 10-11am Pacific Daylight Time/6-7pm British Summer Time. Join us! By Peter Wittek A cornerstone

It took forever and it's way overdue, but the United States Census Bureau has committed to an open source policy, which seems pretty sweet.

Of course it all comes down to execution. The organization is not especially speedy, but it's worth keeping an eye on this. See the current open source projects here.

Welcome to the sixth and final post in a PLOS BLOGS series, Talking about Drug Prices & Access to Medicines. To borrow a phrase from one of our bloggers, “Rage and public outcries are not a rational way to manage

Last night I had a minor freak out episode.  My insulin pump alarm sounded at like 1:30 in the morning (I have type 1 diabetes). It was out of insulin (well, the alarm said "No Delivery" which is what it does when it is out of insulin.  So I got up, barely alert, and went to the fridge to get a bottle from my insulin supply. 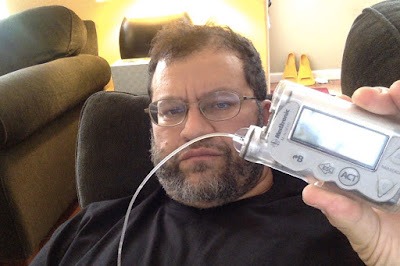 This is not a usual occurrence.  Usually, I pay attention to the warning alarms saying my pump is running low.  But this time I had ignored them.  I guess I thought it would last through the night.  Oops.  But, in the grand scheme of things, this is not that big a deal.  All I have to do is get a new cartridge for the insulin, fill it, and then rewind the pump and load the new cartridge and prime the pump.  Except, this time, I took out the last bottle I have of insulin for my pump from the fridge, and as I turned around to the kitchen island, my hand carrying the insulin wacked into the fridge door, and the bottle flew out of my hand.  It went up a bit and then headed down to our brutally hard tile floor.  I instinctively reached out with my foot and somehow the bottle landed on my foot, not the floor (this is probably related to the daily soccer I have been doing with my son for the last year or so).  My foot-eye coordination never used to be so good.  And thankfully the bottle did not break.  And I loaded up my pump and primed it and headed back to bed.  But I could not sleep.  I was wondering - what would I do if I ran out of insulin or my last bottle broke.  I guess I would go to a 24 hour pharmacy or an emergency room.  Or I would use the now expired back up insulin I had in the fridge.  And then I wondered, what would I do if I could not get any insulin from a drug store or a hospital.

It seemed to me that the best solution would be to have some sort of freeze dried supply of insulin at home that I could rehydrate in an emergency.  So I started Googling that.  And not much came up that seemed right.   And since I was pretty tired, I onyl spent a few minutes at the computer and then I went back to bed.  But to say this ate at me would be an understatement.

This morning I got up, not as early as normal and took my son to school and then headed off to this workshop that was happening on campus hosted by my ICIS (Innovating Communication in Scholarship) Project on "The Social Life of Medical Data"

And bizarrely and amazingly, the topic of making DIY insulin came up part way through the meeting.

At #UCDavisIcis @orkan discussing DIYBio and the medical commons - asks what would it take to have people make insulin via DIYBio
— Jonathan Eisen (@phylogenomics) June 10, 2015

What a coincidence. Although the speaker said he was not going to focus on this, after I posted the Tweet, a response came implying that someone was working on this

Working on it! Got an article coming up by @dfko_0 RT@phylogenomics what would it take to have people make insulin via #DIYBio @orkan @heluc
— Counter Culture Labs (@CountrCultrLabs) June 10, 2015

Well, wow. I had no idea. It makes sense, but I had no idea. And I wondered, is this anyone I know at the Counter Culture Labs doing this. And a few minutes later the answer came to that when I got an email from Patrik D'haeseleer - a friend, colleague, collaborator, and co-author

We're actually trying to get Anthony's piece on Open Source Hacker Insulin guest posted somewhere before our kickstarter for Counter Culture Labs ends tomorrow (under the motto "if it's worth doing, it's worth doing last-minute")

And so I said yes.  And, well, here it is.
Open Source Hacker Insulin
Anthony Di Franco

The effects of untreated diabetes include blindness, impotence, nerve damage and necrosis in the extremities, kidney failure, cardiovascular disease, coma, and death—all good reasons to assure the broad and consistent availability of insulin with decentralized production. Illustration by Zach Weiner of "Saturday Morning Breakfast Cereal."
Hi, I'm Anthony Di Franco. I'm a member of Counter Culture Labs, a biohacker collective in Oakland. (We're currently running a Kickstarter campaign to cement the core capabilities we need to pursue research – more on that below!) I also have type I diabetes. My general interest in biohacking is part of my interest in technological STEMI compression: making technology more efficient and effective and making it work at smaller scales, so that it empowers individuals more and more. My more specific interest is in doing this for the technologies that treat diabetes: mainly those for measuring blood glucose levels and making, purifying, and administering insulin. I've written previously about these topics in Biocoder magazine, among several others, where I suggested a variety of possibilities that might be well-suited to decentralized hackerspace development. 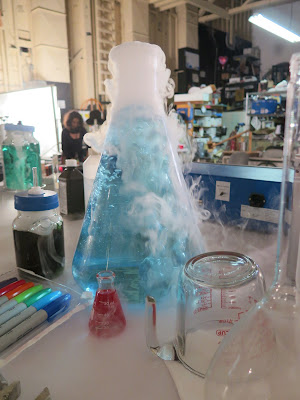 Right now I'd like to focus on insulin production and purification, without which measurement is mostly moot. The goal of producing insulin aligns well with the goals of the broader DIYbio movement for two reasons. First, because recombinant insulin was the first major commercial success of synthetic biology at scale, and set an early example of tools and techniques that shaped the future development of biologics. Second, irrespective of the role they happened to play in history, the tools involved are fundamental to biology and medicine and cover the core functions needed for all serious DIYbio research and other community goals: production and purification of biologics.

Open sourcing treatments is also important because pharmaceuticals in general and insulin and insulin pumping specifically suffer from perverse economic incentives that, at least in part, favor keeping people on the treatments with the most disposable or consumable supplies possible, at the highest price relative to the cost of manufacturing. In terms of the famous razor/blade business model, patients are the razors, and the treatments we need are a long stream of blades with a reliable revenue stream attached. Open source efforts could develop incentives more attuned to encouraging innovations that improve patient outcomes and constitute progress toward a definitive cure, in contrast with the current model which encourages corporations to sit on profits harvested by keeping patients addicted to consumable supplies.

With all that in mind, I'm pleased to announce a new collaboration between members of Counter Culture Labs and Arcturus Biocloud to develop generic insulin. Despite there being no formal barriers to its development, there remains no generic insulin on the market, a perplexing puzzlement pondered in context by Jeremy A Greene in his article in the New England Journal of Medicine. Now, we're preparing to address this problematic situation directly. Arcturus biocloud will provide the means to economically produce the insulin, but we'll still need to develop the means to purify it, eventually to the point where we need not fear the catastrophic consequences of injecting it in impure form – fulminant or chronic allergic reaction to insulin, both of which carry fatal risks. Even though we’re producing the insulin for research purposes only, and certainly aren’t intending to inject it into any living beings in the foreseeable future, a main goal is to demonstrate that we can achieve usable levels of purity in a DIY setting, and to document how we do and share the knowledge. To do that, we'll need to equip Counter Culture Labs with the basics for isolating and purifying biologics, and for that we'll need our kickstarter campaign to succeed. Fortunately, we’ve recently met our base goal, which will let us cover the basics of staying in the building and keeping things up to code. But we’ll still need much more to equip ourselves to work on projects like insulin purification, so we hope we can rely on your support as we pursue our stretch goals.

Please also consider becoming a member and donating via our regular website after our kickstarter ends as that is how we fund DIY insulin and projects like it in the long term.
Anthony Di Franco works at the intersections of complex adaptive systems, economics, and computing. He is a board member of the East Bay biology hackerspace, Counter Culture Labs, where he teaches and organizes events on topics at the intersection of computation and biology. He is also the author of the transgressive historical wuxia manhua, Three Sovereigns.
--------
This is from the "Tree of Life Blog" of Jonathan Eisen, an evolutionary biologist and Open Access advocate at the University of California, Davis. For short updates, follow me on Twitter.
--------

Earlier this week we released version 3.8 of the Lagotto open source software (migrating the software to version 4 of the Rails framework). Lagotto is software that tracks events (views, saves, discussions and citations) around scholarly articles and provides these … Continue reading » 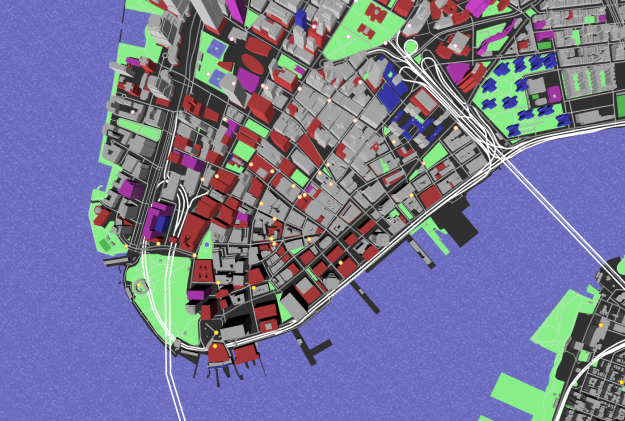 We design things that can be provided as a service, but don't have to be—tools that developers at any level can easily set up and use themselves. We don't want to lock users into proprietary platforms, relying on black boxes they can't take apart. That's why we work on individual components, modular building blocks that anyone can use for better maps. We build things so you can build things.

Relatively new (at least to me), the collection of projects so far makes me think it's worth keeping an eye on the work that comes from these folks. There's an open source geocoder, a 2-D and 3-D mapping engine, and a vector tile service, all on GitHub. Plus, check out this blueprint-style prototype: